Cornhuskertech is my third host review of 8 hosts for October 2010 webhostingstuff.com’s top 25.  It feels a bit weird to do a post on a webhost that is a local host that also does computer repair.  Despite the fact that they have webhostingstuff graphic posted on the site.  A site I might add that is in need for improvements.  The design is outdated, and considering the amount of themes out there it does not take much to update a website to a more modern look.  After all how can you trust a host to be up-to-date with current technology if their webdesign is not up-to-date themselves.  After all a site is a representation of the company it represents.

Cornhuskertech: First, with Cornhusker Tech you are dealing with a local micro-business in Omaha, Nebraska. Buying hosting from Cornhusker Tech directly supports a local individual who in turn supports the local economy.

Yet Cornhuskertech has no problem paying a website that belongs to someone in Singapore for “advertising” to promote his site.

Cornhuskertech: Second, with Cornhusker Tech you are dealing with a local individual who knows who you are. The national hosting providers such as GoDaddy only know you as “number 9876543” when you contact technical support or place an order. With Cornhusker Tech, you are recognized as more than just a number.

What Cornhuskertech does not tell you is that both ThePlanet (I actually was several different numbers with them) and the host that they are really with do treat you like a number.  But I have to wonder by “individual” does that mean only one person is performing the support?

Cornhuskertech: Third, with Cornhusker Tech your hosting fees go directly to a local business operation focused on providing quality service to clients. Unlike some of the others, none of the proceeds will be going to trying to outdo the previous year’s almost-too-racy-for-TV ad during the biggest football game of the year.

Considering part of the customer fees go towards the top 25 positioning on webhostingstuff, its not just supporting the local economy.  Also I have to ask is it better to be with a host that gets people to tattoo themselves as well as get them to change their name to the host name?  No I don’t mean ThePlanet.

So is Cornhuskertech with ThePlanet?

Cornhuskertech: Finally, you may be wondering if Cornhusker Tech really has the bandwidth and reliability to host your site. Cornhusker Tech is a sole-proprietorship, but I lease space in one of the country’s premier datacenters (The Planet). Neither Cornhusker Tech nor The Planet practice overselling, or the practice of setting up more accounts than the server has space or bandwidth to accommodate. So you know that whatever disk space and bandwidth you have paid for will be available to you. The Planet is connected to multiple major IP backbone networks, so is not some small operation dependent on one local ISP throughput. Rest assured that despite the small local operation here in eastern Nebraska, your data is safe in a world-class datacenter.

So is Cornhuskertech with ThePlanet? Yes and no.  This site is not a direct customer of ThePlanet.  Instead they are actually a reseller for HostGator, a direct customer of ThePlanet.   Not the first time I have found a host that was with HostGator (https://hosting-reviews-exposed.com/webhostingstuff-com/webinternethosting.html).  Hostgator has no problem with overselling, for that matter they celbrate it.  http://blog.hostgator.com/2008/10/20/all-you-can-eat-hosting/ Frankly most of the complaints that I have seen from Hostgator seem to be a result of having too many accounts on a server.   Granted I have never used any of ThePlanets shared environments as all the servers I had with them were for my sole use, so I have no idea if they over crowd servers. 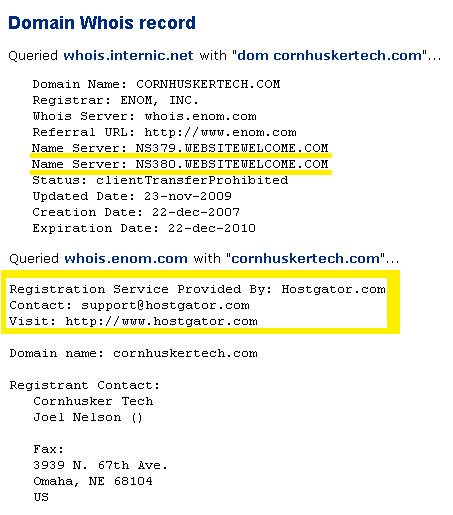 As you can see with the above graphic the  cornhuskertech domain is registered with Hostgator, and the dns is with websitewelcome.com which is the dns that hostgator gives customers.   However I can see that cornhuskertech actually has their own private dns, which I am not sure why they are not using.

That I can not tell,  for that matter I suspect not because of this page which seems the only way to obtain support:

Cornhuskertech: Email is the preferred means of communication. Calls will probably go to voicemail but all legitimate calls will be returned quickly. If you do not reach me by phone, please leave a message so I know who to call and what the call is regarding.

I can understand why people would not want to be considered a number.  I can also understand ranting against godaddy (even though their Football tv ads are a real form of advertising, and using webhostingstuff is not)  But I also know that when it comes to webhosting the ability to get 24 / 7 “+” 365  support is vital.  No visible customer login area is also something that bothers me. I can not find anything in regards to when you can get support.

So computer repair is part of your bread and butter,   it can’t be comforting when software that fixes registration issues puts out a TV commercials offering a cheap fix.  Perhaps he is correct in that FinallyFast.com manufactured the evidence, but it is a commercial.   What I don’t find is that there was any actually trying to see if the software works. Complaints about his customers that used it only to make it harder to fix the pc’s he gets in.  But between his rants about Godaddies and finallyfast.com commercials I have to believe he has a problem with companies that advertise that he is in competition with.  Granted I have no idea if FinallyFast.com works, I use Uniblue to fix my registry issues.  But there has to be a better way for Cornhuskertech to bring in computer income then to go after a commercial.