So far the only change webhostingstuff.com has been capable of is remaking the so called top 25 list into something that is cumbersome. It no longer starts on the main page of webhostingstuff.com.  You have to actually look for it among a list of items for “best hosts”.  Than you only get to see 5 of the some 23 – 29 Best Hosts. Anyone wanting to see the next 5 Best Hosts would have to scroll down past “Show me more Hot Deals …” link.  Where there were 10 hosts to past.  To find “Next  >>>”, and without clicking next I would have no way of knowing that that is how I get more “Best Hosting”.  Which is why since April 2010 my posts on webhostingstuff.com have been far less.  Anyone past the firth position was not going to get their money worth.

On top of that, right now I cannot access their site.  Because one too many inquires triggers an IP block. Never mind that real people in need of hosting may be researching multiple hosting companies to find the right one.

Then there was the original fair and honest ranking webhostingstuff.com page had this:

Not far into the whole spill about honesty, they lay down the justification for the advertising they offer. Advertising that I have yet to see. 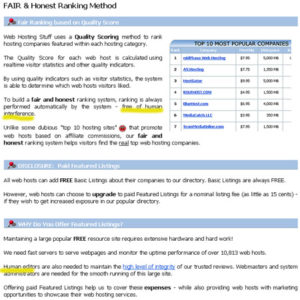 No surprise but that wording is no longer there. 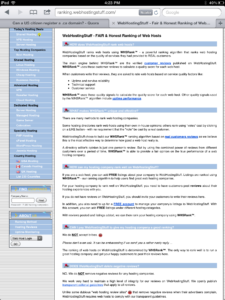 I was going to do several posts on hosts that closed up shop or switched gears. But that seemed long, tedious, and boring (remember I have ADD). But I am going to boil it down into one post. After which my next post is going to deal with what a lot of people have been asking me since my mindshark.ca posts, and that is how to find a seo expert. So one post that focuses on the closures (or switch from hosting to something else).

Into my second month blogging I found i7net.net on webhostingstuff.com

What could be worse than a host that went out of business mere months after appearing on webhostingstuff.com’s top 25?

How about a host that was not online at any point when I found it on the top 25 list (from June – November 2010) of when I was doing reviews. Between the 21 – 25 positions.  Never mind the worst part was webhostingstuff.com clearly indicated they had 72.62% uptime, and had stopped tracking uptime in July 2009. Which means it had been offline longer than a year.

I7net.net became the keystone in my argument against webhostingstuff.com.  Which can be found at:

The other “top” webhostingstuff.com hosts that went offline or are out of the hosting business:

Since my 10looniehost.ca post  about them forgetting to renew their domain (who last I checked was still a best host) I figured I would look and see who else on webhostignstuff.com’s top 25 list was offline.

These were hosts I found between May 2010 – April 2011. I did not track any that entered into the top deals or best host lists.  Because out of 64 hosts, I found a lot of flaws. Some of which I am amazed they are still online

When I first reviewed this host (May 2010), it appeared that it was some messed up Godaddy.com Wild West reseller. By which I mean it appeared the owner of the site was purchasing what people ordered through his reseller account.  If you know as much as I do about Wild West Domains, its illogical. With Wild West Domains your job is to maintain the main site, while working on means to bring in traffic. I know a lot of people that are pretty good with their program. But this guy seems to have a separate order form, where after you order he goes to the reseller and orders what you ordered.  Plus on top of that he is going to have to offer support for a reseller account that is supposed to do the support for you.

He also charged $49.95 to set up WordPress and $9.95 a month for what is essentially a free very easy to set up program.

I know that the domains are under a reseller account because the register shows me Wild West Domains, which is a godaddy.com reseller program.  On top of that most of the domains in this sites reviews were under the name of the owner. Plus hosting was on Godaddy.com’s servers.

Keep in mind I think it is a very bad idea to keep your domain with your hosting company.  However what is worse is letting a hosting provider register a domain for you, and keep it under their name. Webhostingstuff.com was supposed to have a policy of not allowing Wild West Resellers from registering as a host in their system.  Webhostingstuff.com placed it in the top 25, it was number 23 when I reviewed it. 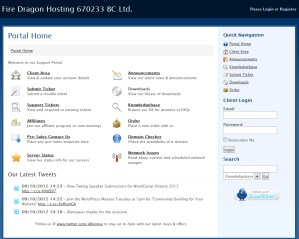 When you goto fire dragonhosting.com there is no product page. It appears to be a login page. I see the ability to order, but I get this message when I click on the order link:

There is not much to add here, other than I have control over topgreenhost.com, and if you type that domain in you will see my first post on this former webhostingstuff.com top host. 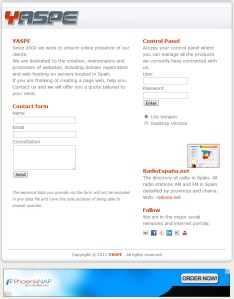 So far yaspe.net devolved into what I can only assume is a web design contact form.  The banner on the bottom goes to securedservers.com, which Alexa says country with the top traffic is China (42,600).  They offer a $75 per sign up or 10% monthly reoccurring payment.

I think it is safe to assume yaspe.net is out of the hosting business.

“As of June 2012, all Aquarius Storage operations are now officially part of DJAB Hosting.”

This host was recently acquired by djabhosting.com. Which does not offer unlimited hosting, so I have to wonder how the unlimited customers transferred over. At best from what http://web.archive.org tells me, they came online December 2008.

Webhostingstuff.com, where awards are bought

To me one of the prerequisites to being a top host is the ability to stand the test of time.  In some cases hosts have not even had to be online to be a best host at webhostingstuff.com (10looniehost.ca and i7net.net), others did not even have to be online a month (Hostinglocker.com).  I have hosts like KVChosting.com that tell me that they are paying for advertising.  Advertising is really hard to find on Webhostingstuff.com. But it is really easy to find hosts that did not earn the right to be called a best host or top deal on webhostingstuff.com. Hosts that have no reviews, little to show for experience. Webhostingstuff.com is too lazy to even fabricate a fake review for the new comers or slow to take off hosts.