Back in April 2011 I missed it where webhostingstuff.com changed their front page layout.  I found out just a few hours after doing a post on winhost.com.  Winhost.com was clearly not happy about me talking about their relationship with webhostingstuff.com.  A discussion that pretty amounted to “what top 25 list?”.   Which lead me to get someone to get me a screen shot to see what was going on, after all webhostingstuff.com was still blocking me.   Everyone that did screen shots for me told me the same thing,  the top 25 was gone.

For the full discussion with winhost.com:

Got to love it when a host tries to do a rebuttal without any proof they are right.  For some reason I am not allowed an opinion, but hosts like this are allowed to do business with sites that claim they are one of the best hosts without any actually use. Regardless of the whole “what top 25 list”,  I have tons of screen shots that showed there was one, and I offered to send winhost.com the unedited ones.  I don’t post full screen shots of webhostinstuff.com for a very good reason.  There is a lot of blank space on the bottom of their site.  Below is an example.  Perhaps I am guessing they want to give you a spot to make notes if you print it out, that is if you can get past the blocking.

Per usual when I asked for where the ppc (pay per click) was located the discussion ends rather quickly.  At first I was told  it was like Google, though if it was I would be able to see where the ppc was.  Interestingly enough you browse through webhostingstuff.com enough you will find Google Adsense.  Which is a bit odd that they participate with Google’s ppc while having their own so called ppc system.

“We are Show casing 25 of the best web hosting companies from our directory of 16,654 web hosting providers.“

Never mind that webhostingstuff.com has never from all the sites I have seen owned by Michel Low used any of the hosts that appear in the top 25.   As Softlayer seems to be the only host that webhostingstuff.com trusts for their hosting needs. So now the list is gone…….. Well gone if you consider not refabricating the system into something else.  However I feel what Micheal Low has done will hamper hosts ability to have effective so called PPC, or as Jixhost.com put it advertising. Which is interesting as I thought the point of advertising was to reach as many people as possible, like the ads you see around this post.   With the new system where it winhost.com appeared on 10th spot so it was on the first page.  Under the new system its on 5th page.  As it appears there is three hosts per Never mind the chance to be blocked if you do too much research.   You buy from those ads I get paid, 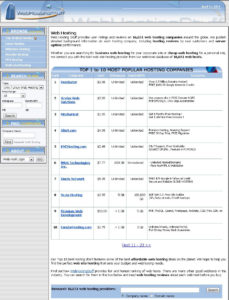 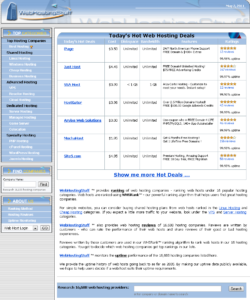 In addition to changing how the top 25 works, categories have been added such as type of host and a few countries.  It seems like a half hearty attempt to deal with other countries as opposed to a focus on U.S. hosts.  Though it ultimately ignores several countries that are growing in their need for hosting.

I have to say that this is a victory in a minor sense.  But then again the increase in blocking is a victory.

Since November 2007 I have trying to disprove the ranking from from webhostingstuff.com, this is the claim is

HOW does WebHostingStuff rank web hosts?

WebHostingStuff ranks web hosts using WHSRank™ – a powerful ranking algorithm that ranks web hosting companies based on the quality of services they had provided to REAL customers.

When customers write their reviews, they are asked to rate web hosts based on service quality factors like:

So how is it that i7net was on the list, as well as other hosts that had no reviews get on this top 25 list if they don’t have any of these factor?  Many of the hosts that appeared on that list had:

Which is still going on, but the new system only encumbers those that bid for top spots.

Endurance International Group is back on Webhostingstuff.com?

I suspect even though there is one host (ssa host) on the new front page that is clearly not a top host.   Most of the host that appear on the main page have a decent to high pay out affiliate program.   I believe that the Endurance International Group hosts are only back up on webhostingstuff.com because they are up for affiliate commissions.   Since I am blocked from my home its just a theory as I am unable to actually see if any cookies are put in my browser.  I have long suspected the only reason Hostgator.com has been on this list is because webhostingstuff.com is a affiliate and is not getting paid for the so called ppc system.

Webhostingstuff.com is no longer my main focus, but that does not mean there will not be random reviews.