Its been a little over a year since I started a blog on my site to write reviews of hosting reviews sites and the hosts that use them.  I want to thank everyone that has inspired me. I also finally start using my mailing list starting with this post.  I realize for some of you I have sent nothing out for a year.   At this point I think I will be sending out a post once a week or month to highlight the posts I did.  As I don’t want to send out more then anyone would want to get, which is part of the reason I have not sent out anything by email till now.

I am pretty sure all the marketing experts I know are going to cringe with my first mail out.   24 hours after this goes out I am sure they will be telling me everything I did wrong.  The same people back when I was first starting pretty much drove me nuts on all things seo.  Last month one of my previous business partners and good friends found out on webhostingtalk.com that I had yet to actually use my mailing list. 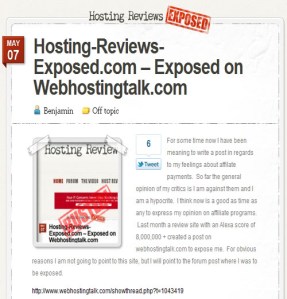 Regardless of having paid him to install it for me, keep in mind it was his idea to install that and the pop up window which asked that for people’s email addresses.  I was the one to get grief over not using the mailing list.  To deal with my lack of understanding of how mailing list programs worked he migrated my mailing list and installed a new program that would function with WordPress.  Plus that annoying popup window is gone.  My previous experience with mail outs was I wrote up a customer mail out and gave it to a tech.   This truly is my first mail out, and where I probable got every thing wrong.

I wanted to thank the people that have contacted me over the last few months after I was supposed to have been exposed, I think the exposers have exposed themselves. I have gotten a lot of email, which I am still working on addressing.  So much so that I have not really had time to write up new posts on review sites and the hosts that deal with them.  Plus the work that pays the bills tends to take priority over what does not.

To those that did not get a personal response from me

I apologize for not contacting everyone.  I have read each every email that has been sent to me.   Some of the questions I was not sure how to respond too.  So I am going to take a mass attempt at it.  I really hate giving copy and paste responses.

I am sorry to say but I am not prepared at this time to recommend any host.  A hosting recommendation especially from a site like this is a huge responsibility.  Let me be the first to say that you should still be skeptical of who I recommend, a little skepticism can be a healthy thing.  Any host that I recommend would have I would have to actually use, not to mention fully disclose any and all activities. Perhaps in the near future I will be able to start recommending hosts, but no guarantees that I ever will.

Regardless I will be posting tips for finding a host some time this month.

Is there a site that offers reviews that I would recommend?

There are no review sites I would recommend.  As every site I encounter are in it for one and one reason only, which is to get paid regardless if the host is good or not.  Other sites such as webhostingtalk.com may be a good site to find what people may think of a host, but even the positives as well as the negatives can be faked.  I have been contacted by a lot of review sites some asking for me to put my name behind them (or asking me to sell my site).  But the biggest problem is they recommend the same hosts as other sites, ones that offer high affiliate pay outs.  Frankly to be unbiased review sites should list the hosts that pay very little or nothing at all in addition to the high payout hosts.  A simple list of a few hosts does not cut it.

Webhostingstuff.com is no longer going to be the main focus

I have had a lot of hosts and people tell me that webhostingstuff.com is no longer relevant.

Before you say reviews about this site are pointless I would like you to look at:

I for one would love to have the  search engine ranking that this site has.  With stats like that the site is very relevant.   There also a lot of people out there that do not know the truth behind review sites like this.

However things have changed.  The drastic changes to the top 25 have become cumbersome for any host that pays to get the exposure they desire.   On top of that add the blocking that occurs if you do too much research on companies on any site that appears on webhostingstuff.com.  I am now going to limit my reviews to those that appear on the main page.  More details on that in my next post.  I may even just collect sites that appear and review them every couple of months.

You want me to do a review of your company

I have to say that this is the most mind boggling of requests I get. There are at this time only 3 providers I use and I don’t exactly have nice things to say about them.  I stopped using godaddy.com because of the very flaws I mentioned, because I don’t think they are for a long term solution for a serious site.   There is no host that I have had a positive review on, here or even on my personal blogs.  There are only 2 hosts that I have done a review on per request, only because I found these hosts also contacted review sites to do the same like hostingsthatsuck.com.  The reviews were disingenuous, because they did not take into account that the hosts had just started, but clearly the only thing this review site cared about was a commission.

Regardless in the interest of improving my search engine rankings by viable content, I will be in the very near future do reviews for hosts that request it.  I am actually in the progress of working with someone to do surface reviews which will be terms of service, support, and design.  More details to come shortly.  As  soon as  my new content writer is done redoing all the hosts I reviewed in the past, they can go over your site to find flaws.  I will make it clear that the host requested this versus being found on a fake review site.  In which case you can see where your site needs to improve.

To the hosts that have given me new leads

While I am not going to name hosts that have contacted me on this post.  I want to personally thank you for providing me with details I never thought to look for.   When I used the information you gave me I will of coarse post you as my resource, or quote you as a silent witness.  I am not going to claim anything as my own, when I don’t deserve credit.

To those that want me to expose their host

Now this does not apply to everyone that wrote me.  There are many people that have valid complaints, and actually responding to my email exchange.  But there a lot of people that have contacted me to expose a host without giving me a valid argument or nothing at all.

The problem with exposing a host or doing a review is I need reasoning and evidence.  I can’t simple go after a host because you don’t like them.  This is something I do in my spare time.  Spare time being the reason for me getting out of the hosting industry,  as I had very little of it when I was running 4 companies.  I can’t begin to tell you how wonderful it is to wake up in the morning and not have to go to my desk to make sure other people’s sites are up.  Simply wonderful that I can take a cup of coffee and my kindle outside on my back patio to start my morning.   Of coarse you can argue I get paid to do this, with $56 last month (meaning no paycheck from Google next month) clearly money is not the reason to do a negative post.  You can’t just send me an email and not return my replies and expect me to spend that precious  spare time on writing up reviews with little to go on.

One particular person wants me to bust a company because he bought a domain that was too similar to the host, and signed up as a reseller plan similar to what Wild West Domains offers.  Which in all honesty he is lucky that having his domain taking away was the only thing that happen.   I am not going to defend what amounts brand deception.

Then there are people that have lost all the data because they relied on their host to secure it.   I can fault a company for not having quality servers, but being responsible for backing up your data is not something I can hold a host responsible for.  Every time I do a post, every time I approve comments, and every time I write a response to comments just for this blog I do a back up.  Which then goes to several drives in my house, on my parents computers, and with third parties such as Amazon cloud.  My friends refer to me as a data hoarder as I have stuff I wrote in dos back in the early 90’s.  I even have a safety deposit box I exchange usb drives with once a week.  Either way if this site was to go down I have multiple back ups to bring it back up, I am not going to rely on Media Temple or any provider to be my sole source of back up.   If your data is too valauble to lose, you can’t trust a single source for back up.  Which I have yet to find any serious host that does not have a clause in their terms of service that they are no responsible for data lose.

There is a phrase that comes to mind that that I always considered an idiot statement, the customer is always right.  If you ever have the opportunity to to work a minimum wage job doing retail, you will know how untrue that statement is.   During my college days I had that opportunity and worked at Wal-Mart in the pet department for a year. One particular episode comes to mind where I had to accept a refund on a dog chain that was clearly really old as the red plastic was sun bleached white, and the steel was heavily tarnished.  The guy claimed that it was defective and he purchased it last week.  Regardless of the evidence I had to exchange his old dog chain with a new one.   My manager was with me on not issuing a refund up until he started making a scene and other customers started to notice.  I have never

What is in the future of hosting-reviews-exposed?

There are a lot of sites that offer reviews in exchange for an affiliate commission.  Hosts that create their own fake reviews site(s).  Hosts that spam or gain from their affiliates that spam.

I have only just started my reviews.