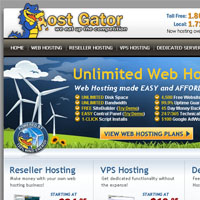 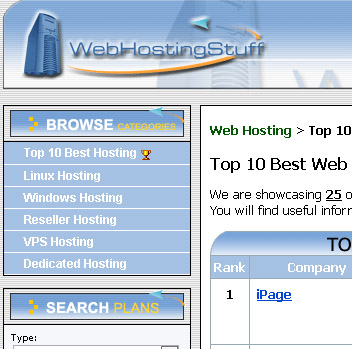 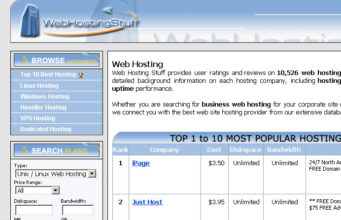 Clearly Hostgator has no problem with listing awards from websites that are nothing more then elaborate or not so elaborate affiliates.

There are only a few of those that offer an award that don’t have an affiliate link, or better yet a coupon. Plus webhostingstuff.com is on the list.

Though one of the affiliates……….. I mean award sites does not have all good reviews:

I am not sure the point of these “awards” when most of the sites don’t have any visible advertising, other then coupons and affiliate links. Clearly they have to pay for their hosting some how, nor is anyone going to write tons of content for nothing. After all are you going to bad mouth an organization that will pay you $50 – $125 per sign up, or are you going to sing their praises. This is nothing more the a list of reviews for profit, not an unbiased set up like Consumer Reports.

So far I see that Hostgator.com has two commission programs. One at Commission Junction and their own.

It appears unlike other companies I have reviewed this is on any term Monthly – higher terms.

But the big payouts are reason why they are growing so fast is just like the other 4 hosts I reviewed they have a large payout that encourages their affiliates to flood the search engines with tons of crap. You can see this when you do a search on “host gator sucks”, real complaints are hidden in between the “I have your coupon” sites and other affiliates.

Hostgartor.com likes to brag about numbers, which I imagine impresses people to believe they are a legit operation. Which is why I got so many comments on my video from people who need an lesson on ethics, that having the money does not mean you need to cheat. Their large numbers are based on a high payout. What I would love to know is the amount of cancellations versus the amount of new orders. The amount of refunds. How about operating costs? Numbers that I don’t see. Their company may be growing, but they are going to suffer loses. Another number I would like to see is the number of affiliate payouts. What they are paying Commission Junction, after all the affiliate gets $100 per sign up, and commission junction is not a free operation.

Then there is this link http://www.googlelady.com/1281/exhostgator-employee/

I am not sure how valid the information is, but there are several points that ring true such as the affiliate program. But anyone can look that up. Its not like the person she is supposedly interviewing is not disgruntle or for that matter real. But having worked at Wal-Mart during my college years I know how those benefits that drew me in were not immediately available and had tons of catches. Two examples were their health insurance and college tuition programs. They claimed I had to be a full time employee (did not matter I was working 40 hours a week for 18 months). But on the flip side I have been with good employers that had dirt threw at them that were lies, such as one company I only had to wait 30 days for my health insurance to kick in. But I have to wonder if hostgators employee pages http://www.hostgator.com/benefits.shtml is nothing more then veneer. After all they have make sacrifices some where to make sure that their affiliates that drive those big numbers and drown out the negative feedback.

Unlimited Hostgator.com plan, you must use this much space in order to apply

I am not sure how many customers read the cartoon and saw the irony in Hostgator talking about the wonders of overselling and unlimited space. But you have a heavy set man at a all you can eat buffet next to what is mock “you must be this tall” roll coaster ride sign, indicating you must be this thin to enter.  Subliminal truth?

Even though Hostgator has their own building, it does not appear they have their own server center, and they to like the first three companies I reviewed that are also using theplanet.com.

My finale thoughts on rather anyone should buy from Hostgator.com

Even though Hostgator.com is only in number 5th position, they probable should be in the top position at webhostingstuff.com. Granted I consider the top 25 hosts, a list for the top 25 to avoid because their main concern is raking in money, not making investing in infrastructure that advances their services. Developing “unlimited” / “overselling” is not investing in infrastructure, but concentrating on the misinformed world wide consumer that may not understand that you get what you pay for. Bernie Madoff did the same thing with promises of over optimistic promise of high returns on investments.  Anyone that offers a higher then 100% commission on a first payment is more interested in bringing customers in then keeping them.

This is my own personal rant against hostgator.com

In many ways hostgator.com has been a good host for me, and I am not saying because I hosted with them. I say that because I would get a lot of their dissatisfied customers. Customers that thought before hostgator that my prices were too high, only turn around and realize that being cheap on your source of income was not all that smart. For that matter I think at the time I loved hostgator.com at least until I saw this post back in February 2009:

It was as if Hostgator was telling everyone in the United States we have jobs but you ignore us. Their a big host, but it does not mean everyone is going to know who they are. So in the search for jobs they are not on the top of the list. Better yet not everyone is going to have skills to deal with computers and customer service. My grandfather a soft spoken person, awesome at fixing cars (for that matter he spent more time with his truck then my grandmother) and generally any thing mechanical would not have the first idea of how to use a computer. I could not imagine him on the phone trying to handle customer service, as he is not very loud.

Somehow the 10% employment was a result of people being lazy. It had nothing to do with the mismanagement with companies, the deregulation to prevent those companies from being corrupt, or did it? Apparently Brent has never had to go door to door with a resume. What job that you might be able to get barely pays the bills so you have to get a second job and still its not enough. The jobs that you have skills for won’t hire because you had no experience (in my case) or you were too old (my grandfathers case). The first job I had to settle for did not even involve a resume but an application. I am sorry Brent, but you need to walk in the people that are getting welfare’s shoes before complaining about handouts. I encountered these problems when I was in school and my scholarship that only covered so many of of my expenses had to be supplemented. The effort to find a secondary source of income was killing my grades. Yes there are dead beats, and even those that milk the system to get a nice pay check from the government. But its not everyone.

But this is coming from someone pretending to be a bum for a day: