So we are in late October 2010, and I have had some trouble getting a into webhostingstuff.com.  That and friends and associates who have never had anything to with this so called review site till this month had nothing to do with with this site.  Granted other that have helped me in the past are able to get through.  But more on that on a later date.  Because the three screen shots tell me alot about this company.

At this point there is only one big name on their top 25, and that is hostgator.  Ipage (owned by Endurance International Group) and Just host (supposiblly bought up byEndurance International Group).  The rumor is that hostgator.com is also being bought by eig.  I am not sure I can believe that one as the owners of this company are some what ego driven, and I think the only reason they would give up hostgator is that something else is available to give them the spot light they get from hostgator.  But if hostgator disappears off of webhostingstuff.com I have to almost believe eig may now own them.

This leave me to speculate that Endurance International Group took their host(s) off because webhostingstuff.com is no longer an investment.  After all they did remove fatcow last month.

The only new introduction on the top 25 in the 1 – 10 spot is a host called Cirtexhosting.  Intrestingly enough they have a 60% approval rating to get the 5th spot. 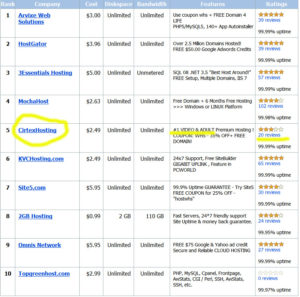 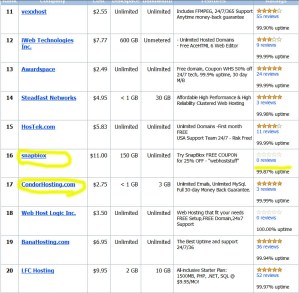 Infinitie Networks has a 40% customer approval rating.   Cornhusker Tech has no reviews. 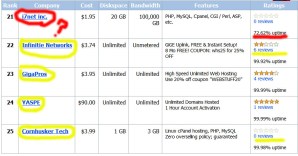 For full details as to why I find this odd you can go to https://hosting-reviews-exposed.com/webhostingstuff-com/i7net.html for full details on a webhost thats not been online most of this year.

It really does appear that its going down hill for webhostingstuff

Currently there is only one webhost of any ranking on webhostingstuff (hostgator), all the rest are just host trying to hang on or just a fly by night operation.