I7net was the host that I felt I should keep an eye on.  Because back in June 2010 they were number 25 on webhostingstuff.com.

Today they are no longer on the top 25,  for that matter online,  Unless you count that apache page you get from cPanel. There is no site now taking business.  For those who doubted me about webhostingstuff faking the rankings, my proof is I7net.  For some reason they were in the top 25 of a company that claims:

The Quality Score for each web host is calculated using realtime visitor statistics and other quality indicators.

By using quality indicators such as visitor statistics, the system is able to determine which web hosts visitors liked.

Unlike some dubious “top 10 hosting sites”

What did I miss on I7net last time?

I did not read the webhostingstuff uptime report for i7net, and clearly there was even more reason that this host should not be on top.  At the time webhostinstuff made it clear due to the rampant downtime they were no longer monitoring uptime prior to having them in the top 25. 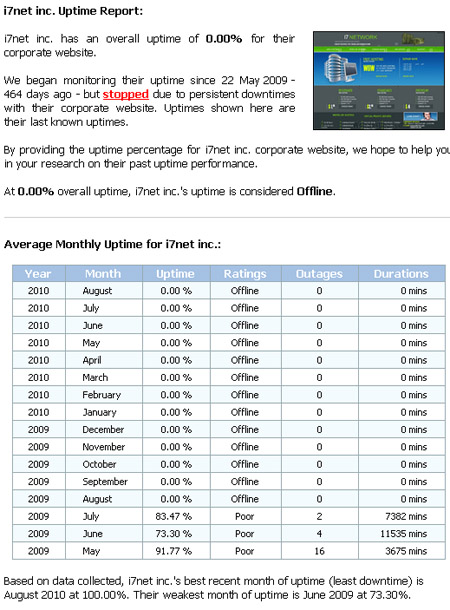