Awardspace is my second host out of  7 of webhostingstuff.com September 2010 list.  This is the second host to have a free hosting plan.  However unlike the last host I reviewed there is a very limited 200 meg account.  Not really something you can get a basic word press blog on.  But there are still things that trouble me such as their own forums.  That there site appeared on phishtank.com.  Repeated hack attempts against their own forum which resulted in down time.  I supposed from one angle you could say that its a level of transparency that most hosts simply do not do.

Its not all bad, atleast awardspace does not tolerate hate speech

One of the first things I did was search on google for awardspace sucks.  The second result was troubling, and was pure hatred of Africa. 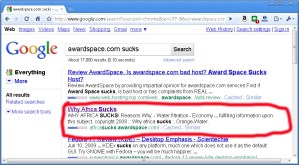 Below is the least offensive page from this subdomain site.  The rest of the pages were enough for me to wish sites creator a long and painful fate. 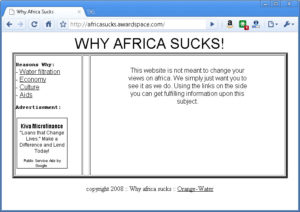 Andrew: There are no additional charges

Andrew: The free plan comes for no price

Benjamin: ok, one thing I need to know.

Benjamin: While looking up your site I found something disturbing and I want to know if this is allowed content.

Andrew: The site is closed down

Benjamin: I found it while on the first page of search engine results on google it appears to have been up for 2 years

Andrew: Thank you for notifying us about that

Andrew: We really do not tolerate such sites

Benjamin: is there any other pages with details on the free account? I just want something to start out with an upgrade later

Andrew: Basically here are all the free plan characteristics:
http://www.awardspace.com/web-hosting/free-shared-hosting

Benjamin: ok thanks I will review

Andrew of awardspace had immediately removed this garbage off.  For that I a commend Awardspace.  But I have to question their judgement because this was on the very first page of ‘awardspace sucks’.  It appears to have been up for 2 years.  This is one of the reasons I did not want to offer people subdomains off my hosting companies because of the bad press that they may bring.

If it was someone that was my customer I would have made sure to refund every penny they paid.  I would not want to profit off a person that does such crap.  Not to mention against my business partners wishes, called the bastard up and give them a piece of my mind.  I really do not like this level of intolerance, and pure stupid hatred.

Is Awardspace a green host?

I have no idea, they point to a European energy company, whose site is in German.  Other then that there is nothing else to indicate hey are green.

I know that Europe is ahead of the U.S. in green.   But that does not mean this is not a energy company that buys energy credits.

The biggest positive is that they deleted the Africa sucks site.  But there are things such as 50% affiliate commission.  Then there is their refund policy thats not clear and straight forward.  It reads pretty much like if you have to have ‘x’ to have ‘y’ in order to have ‘z’.  It only applies to 1 – 5 year terms.

I have a problem with 5 year payment plans.  Time changes, and thats one month out of 60 to see if you will commit to a plan. If after 31 days you don’t like the plan then your stuck or out more money. 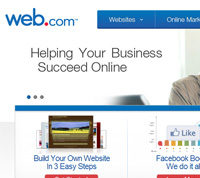 Web.com, 3 Million customers and only one site to show for it.