Since I just got a new connection set up I figured the first place I would go would be webhostingstuff November 2010 list.  Still as before I have friends that are being blocked when they tried to assist me with getting information from this phony review site.

The blocking strategy boggles the mind.

This time around there is not a huge change over like last month with the hosts that appear on the top 25.  For that matter I find only one of the hosts that enter the list to be of huge interest.  Even though I see two young sites one a year old another not even a month old.   2 which names don’t even appear to have anything to do with websites.

Amazingly Hostgator is now in the number 1 postion, even though they are the only main stream host to stick with WHS.  Still not sigh of the Endurance International Group sites on the top 25, unless of coarse they bought someone on the list.

Despite my marking  cirtexhosting.com there is no new hosts this month in the 1 – 10 rankings. 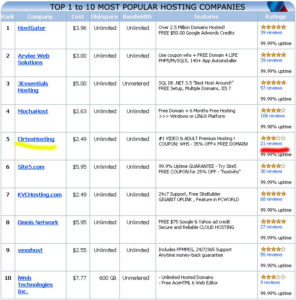 hostinglocker.com, which remarkable with zero reviews and a domain that was created on October 22, 2010 gets the 11th spot

siteground.com, which I have know about for some time.  I have no idea why siteground would be paying for a ranking on this fake review site especially when they have the most reviews I have seen on the top 25.  343 reviews with a 80% ranking is not a bad thing.   I suspect I will find a lot of interesting stuff on siteground when it comes time to do their post.  WHS’s own rankings that can be seen by going to the page for site ground have them at: 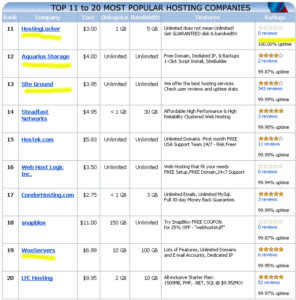 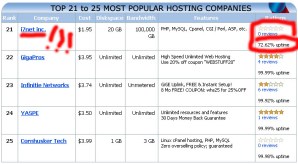 For full details as to why I find this odd you can go to https://hosting-reviews-exposed.com/webhostingstuff-com/i7net.html for full details on a webhost thats not been online most of this year.

It still seems that its going down hill for webhostingstuff