Webhostingstuff.com did not have a lot of change over for December 2010.  Three of these hosts I am pretty sure are not major players (Layersevenhosting.com, Infuseweb.com, and Phastnet.com).  One host may be a major player (Avahost.net), but I am willing to wager that they are in trouble and bleeding out clients, but thats only an assumption.  The only big hosts that I am sure of on this top 25 list you get on by how much you pay for “advertising” is Hostgator.com and Siteground.com.  I have to say that I had no problem finding the flaws in these 4 hosts.

Here is the video I made last month to show case my finding just off the surface of the top 25 reviews:

So in summary here is what I found out about these 4 hosts.

Despite having a 7 day guarantee I think the most troubling part about this host is that their partner company claims to be a SEO experts, and that they can propel your site.  To that I have to say why is this Alexa score so high: 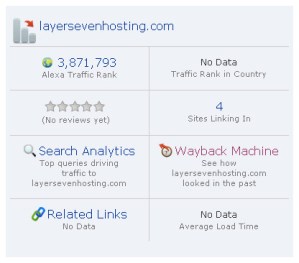 The rank is pretty high even compared to most small hosts (the lower the number the better the score).  It may be forgivable to not have Brash.im with a high SEO score, but its another for the webhost you own to be worse then your SEO site

What stuck out to me when I first saw this host on the “top” 25 list was that this host only had one review.

This review was back in January 13, 2008 which was more then three years ago.  However this site redirects to a site owned by infusedweb.  I have say though that the 3 testimonials on the site are all active websites.

Inspite of the review, I am troubled but what is a really long terms of service.  The definitions section alone is almost 3 pages long, has 820 words / 5020 characters. A section that I feel is over kill.

Even if you were to over look these flaws and sign up for hosting, the domain fees are way above most domain register companies and a perfect example of why it pays to keep your domain and your hosting with separate companies.  Especially when .tv domains cost 3 times that of competing domain registers.

Another host with just one review.  But the interesting thing about this Phastnet.com customer is that they changed their dns in October 2008

The one thing I wish they would answer is “How can you tell a reliable web hosting provider from an unreliable one?”.

This is another company where you are better off buying your domain from a third party due to what I consider 150% more then what you could pay with a domain register.

I think the one main point I found while reviewing Avahost.net was that they own their own “top” 10 hosting  site, where remarkable they have been the number 1 host everytime.  cheap-web-hosting-review.com.

If a company thats willing to fake its own postion is not enough perhaps their review with webhostingstuff.com will be enough:

January 2010 I find 5 new hosts on Webhostingstuff.com, tomorrow I will release the video and post for my surface findings.