Layersevenhosting.com is my First host review of 4 hosts for December 2010 webhostingstuff.com’s top 25.  When I first reviewed this host 2 things came to mind because it had zero reviews.  A. it was either a really old host that no one ever noticed or B. it was a fairly new host.   Turns out it was created August 2009.  The design for this site is clunky and in some cases text is hard to read as parts of the graphics make it hard to read the text.  From what I see this is primarily a U.K. host that seems to be focused on the U.K. market.  I am not sure the point of using webhostingstuff.com as this is a site that focuses on the U.S. market.  The point that makes me think that people should avoid this company is because they offer “7 Day moneyback guarantee“.  I can not stress enough that anything less then 30 days is not enough time.   For starters I think my focus is the whole zero reviews thing that sticks out when I look at Layersevenhosting’s 20th spot in the top 25 of webhostingstuff.com.

Webhostingstuff uses the excuse that they use several points of measurement to determine if a host is popular.   But as you can see from this graphic that this host has been assigned a traffic popularity number of 4,889 of 12,786 hosts.   You can also see that this is a host that has zero reviews, so it was not customer feed back that made Layersevenhosting number 20 0ut of 25 hosts.   This is just another host that happens to be in the top because they are the 20th highest payer for “advertising”.

I have to admit there was not alot to look at when it came to layersevenhosting.com, honestly it was pretty dull.   But I found a mention of Brash Limited this peaked my interest because I had to wonder who this other company that owned or was behind this host.  Searching I find brash.im, where I find colorful but distracting website.  I get the point of what Brash is when I read part of the rotating graphics “We can improve your online presence – FACT“.

Looking at the Alexa tool in my Google chrome browser I have to laugh as I look at both Layersevenhosting.com and brash.im.  Neither of them have cleared the million mark on Alexa.  Brash.im has a zero Google Page Rank.  Keep in mind my SEO skills are limited to those that help me.  But you would think that these two sites would do far better then I am. 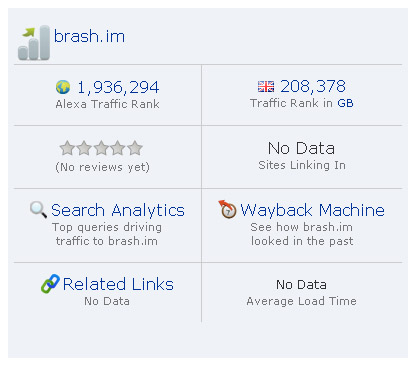 If brash.im was not bad enough improving their own search engine placement.  The very hosting company they promote on the site should serve as an example of their skill in SEO services.  This is the kind of data that tells you to avoid a company that tells you “we can improve your online presence – FACT“, its not a fact because they can’t do it for themselves. 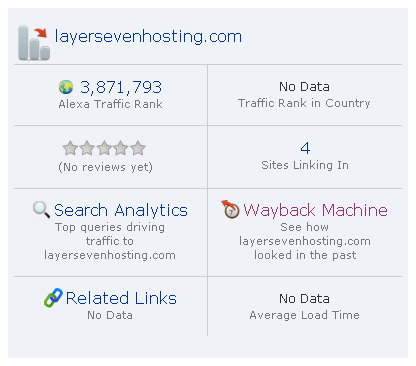 I am a little confused by the Search Engine Data for brash.im.  They have far more back links then I do yet they have a zero Google Page rank and much higher Alexa score.  I can tell you now that my business partner is capable of dropping a site down to around 70,000 Alexa score in three months. 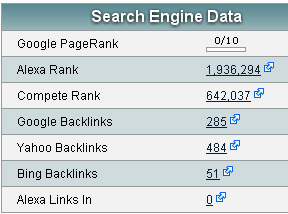 If brash.im and Layersevenhosting can not improve their own search engine standing how will they improve yours?