I find 4 more hosts on Webhostingstuff.com that I have never reviewed before.   Hostgator stays at number 2, and Siteground is here for another month.  But I7net is missing, well more like deleted from the directory.  It seems almost like an attempt to sweep this mistake under the rug and hope that many people did not notice this mistake.  It may very well be over looked.  Its not like I have huge amounts of traffic coming in, and truth be told I may be the only one that finds I7net fascinating.  Traffic is not that great on this site, for the matter one of the worst topics for bringing people in is I7net.  I can not help but say that I7net was the dead canary no one bothered to look at while browsing for a host on webhostingstuff.com.

Here is the video summary for this month:

Nothing new here, but…..

I don’t think Hostgator is purchasing “advertising” from Webhostingstuff.com

This has been a thought in the back of my head for some time now.  Why would a host like Hostgator bothered to buy, especially when all the other big names hosts have jumped ship.  I think the simple answer to that is that a simple commission of $125 per sign up is enough reason to keep a host on with people that pay for this unseen advertising.    Plus while the negative reviews are slim for hostgator, the new reviews are not coming as fast as they are for other review sites. 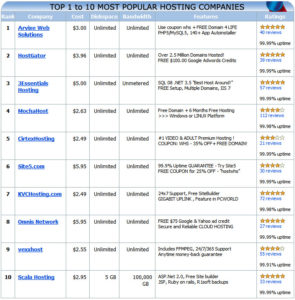 Site ground is still in the “top 25 list.  While I am still working on my November 2010 list,  this is the host that holds me up from finishing it.

After that there is Layer Seven Hosting.  I find it interesting that there is no reviews for this site.  Compared to many this is a hosting company that does not offer a huge amount of resources.

Three sites find themselves in the 21 – 25th spots of webhostingstuff.com’s list.

Infuse Web which has had only 1 review and that was in January 2008.

Phastnet which has had only 1 review and that was in September 2008.

The last host is Avahost with a 60% approval rating (3 out of 5 stars), which means they are barely passing.  I will defiantly be going through the reviews for this host when I do my own review. 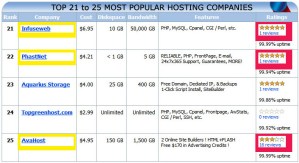