GigaPros.com is my seventh host review of 8 hosts for October 2010 webhostingstuff.com’s top 25.  This is another host that uses Ratepoint.com to show case reviews.  In the back of my mind I tend to wonder about what the angle is with Ratepoint.com.  In the last post I did about a host that used them(https://hosting-reviews-exposed.com/webhostingstuff-com/site5-sucks.html), I had a rather quirky conversation.  On the phone they told me I could delete the negative feed back as long as I made some effort to appease the customer.  But my email told me an entirely different story that it would not be deleted.  Gigapros.com has an amazing amount of reviews, and per usual no negative reviews.  My first thought was to look for negative reviews on other sites.   They are out there, suprisingly only a few negative reviews, yet a surprisingly large number of positive reviews.  Yet unlike webhostingstuff that has only 4 reviews, they do not have the domains of the sites like webhostingstuff.com.  There is nothing to validate these as real reviews on the sites where there is a huge number of reviews.

I have to say that this has only made me more curious about ratepoint.com.  Rumor wise here is what I have to wonder if its true.

So how old is GigaPros.com?

Honestly I would have thought that the site would be older then what I had suspected based on what Alexa tells me and the amount of reviews.  A whois tells me its only 2 years old.

What I find strange is that a company that is only 2 years old has a ton of feed back on 2 sites their own paid for Ratepoint account, but only 4 on webhostingstuff.com which they are one of the top 25 hosts for October 2010. 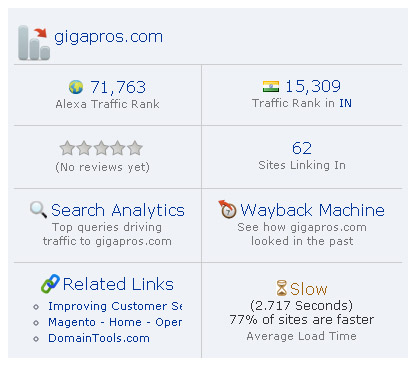 Interesting tidbit there about GigaPros being slow.

At GigaPros, we enforce ZERO Overselling Policy. So, you get 100% guaranteed server resource allocation at all times. No overloaded server means high reliability & more uptime for your website.

So if you decided to use 20 trigs of space it will not over load GigaPros server all for a whopping $3.99.

How is GigaPros Different?

Honesty is the key to any successful business. We do not hide any tricky limitations in our Terms and Conditions page. Instead, we show you the exact resources that you are buying from us. And that’s the base of our Zero Overselling Policy. You fully get what you pay for! No excuses, no gimmicks, no lies

Honesty is not always the key to a successful business, after all this is the same company that is using webhostingstuff for “advertising”, could someone please point me to their advertising?

Here is what Wikipedia says about Overselling:

Overselling refers to selling of a volatile good or service in excess of actual capacity. In the travel industry, the term overbooking is used instead. In telecommunications, sometimes the term oversubscription is preferred. The practice occurs intentionally where sellers expect that some buyers will not consume all of the resources they are entitled to, or that some buyers will cancel.

Which means that “Honesty is the key to any successful business” is not what Gigapros is practicing.  Here is what Wikipedia says about the term in relation to hosting:

In the web hosting industry, the term is used to describe a situation in which a company provides hosting plans that are unsustainable if every one of its customers uses the full extent of services advertised. The term is usually referred to the web space and bandwidth transfer allowance. A hosting company may offer unlimited space and unlimited bandwidth, however, they put other restrictions in place such as CPU usage or inode limit. They may have onerous restrictions and one-sided contracts that lets them cancel the hosting of anybody that puts a strain on their system or fully uses their claimed allotments.

This practice usually incurs little ill-effect since most customers do not use any significant portion of their allocated share. If a customer has a small, low-traffic site serving static HTMLpages, few resources will be used. If a customer wishes to run a high-traffic, professional, or business website an oversold hosting account can be detrimental. In these cases, a shared hosting provider that does not oversell, a virtual private server or dedicated server is a preferred option.

I don’t agree completly agree with the hosting description for overselling on Wikipedia.  But in essence if a hosting package says that its unlimited then yes it is being oversold.

The funny thing is that in my review of site5.com they not only used ratepoint.com just like Gigapros.com they think you can offer a unlimited plan without overselling:

It is important to remember that “unlimited” does not always indicate “oversold”, so do not let anyone tell you otherwise! We monitor our servers constantly to ensure optimal operating performance.

I will tell you that unlimited access is clearly overselling.

I have to wonder based on the tons of postive reviews, ratepoint.com, and the belief that unlimited hosting does not mean overselling if there is not a connection between these two companies

This GigaPros post could be longer, especially the part where they compare themselves to other hosts.