Everity.com is my Second host review of 5 hosts for January 2011 webhostingstuff.com’s top 25.  On the surface it appears that they have 12 – 5 star reviews with webhostingstuff.com.   The problem of coarse is that last review was April 2, 2008, before that it was December 2, 2007.  There is nothing available to show why this host should be in the top 25 for this month.   By the way the sites that were under those two reviews are hosting with other companies now. otakuplayground.com is with middhosting.com mamigon.com is with godaddy.com

There is only one place I can find a review done in the last 12 months for Everity.com

“Having only used two hosts in my life, I cannot say with authority that eVerity is the WORST host out there. But I can say from over 5 yrs experience that are the worst host that I have ever dealt with, that their customer service is nonexistent, that their support is a joke, that their security is akin to an old hound dog that might occasionally muster up a bark or two but certainly is past his prime, and that choosing eVerity as my hosting company was the worst and most expensive decision that I have ever made in relation to my web presence.“

Thats is the only review that web-hosting-top has.  After that I can only find reviews in 2009 at http://www.vistainter.com/reviews/E/everity.com/

There is another negative review there, but apparently they fixed it and the reviewer retracted it.  So basically only that one I quoted is their only negative feed back.

So what do I think of the Everity.com design?

Of coarse you know I am going to complain about the design if you have read my previous posts.  It appears outdated.  But what I find odd is if you navigate enough the links start becoming strange with long parts of code in the url.

I know that this site is on Theplanets servers, however I suspect this may be a part of reseller program.

The age thing is a curious thing.  I proable would not have brought it up if I was not been looking at the way back machine.  Here is what the whois says: 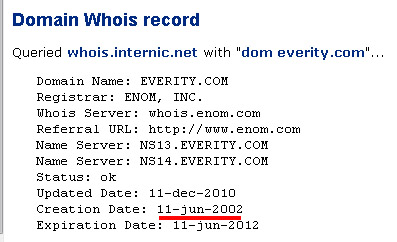 Though the whois shows that this domain has a history back to 2001 with the way back machine.  I tend to wonder if that is because they let the domain expire, or did the domain belong to someone else?

They are currently stating: http://everity.com/aboutus.php?sid=80WUQgqMGB90yRF8sWFqJaRofNanMRkt

“eVerity was formed by James Hold on July 4, 2000. Originally named SmarttBiz, eVerity began by offering merchant services and web design services to both online-only and established brick-and-mortar companies. Shortly after opening, eVerity began offering web hosting and domain registration services as well. In February 2002, merchant services were phased out so that the web hosting division could be given priority. To this day, we have continually provided a top-rated product, as demonstrated by having one of the lowest turnover rates in the industry.“

So what was the domain for SmarttBiz?  SmarttBiz.com does not exist anymore.  So I can’t tell when it existed and why it was abandoned.   Not to mention Everity.com was bought until June 11, 2002.  Though there is a history on the way back machine in 2001. Here is perhaps the explantion where they got 1998: “James Hold, eVerity’s President and Founder, began developing web sites in 1998 while attending University.“.  Though I have to admit I would like to see the numbers they have to prove they have one of the lowest turnover rates in the industry.  As I stated earlier they only have one valid negative review, but they have had so few reviews in the last 12 months (1 to be exact).

One finale thought about everity.com

Here is a reason to read the terms of service:

“However, we do charge a reinstatement fee of $5.00 if your account has to be suspended for non-payment and you want it restored for any reason”

I have to ask how else is eVerity on the top 25 for webhostingstuff if not by “Advertising”?