Cyberhostpro is my sixth host out of  7 of webhostingstuff.com September 2010 list.  There is not a lot that I can tell you from just a simple search and once over look of the site.  There are not a lot of reviews out there.  The site is 5 years old.  I can tell you from what I seen they used to be housed on servers in the U.S. but changed over to a U.K. network.  Not that I ever made a big deal about what nation I was in.  I felt that if I did I might alienate someone.   Though it was not uncommon knowledge that every site that I did, operated under the U.S. Dollar.  Though towards the end I wanted to get a system up that would charge a customer based on their country.  Its a maddning system I admit given how many forms of currency are out there, and what it would take to have it up to date.  I could go on far longer on this blog post on currency exchanges then I could on cyberhostpro.  But lets look at the one thing that is missing on the main page, the tos (i.e. terms of service).  Granted this post may be one of my worst as I am battling a cold.  So while I am rather sleepy, I am also restless.  I am not one of those that can sleep out a disease, if I was the cold would probable have been gone sooner.  So here is my dieased ridden mind’s thoughts on cyberhostpro.

So where is the terms of service on cyberhostpro?

I am not sure what is with these hosts that are not up front with their terms of service.  As I indicated the merchants I dealt with are sticklers for that. They would look for that as well as the contact page.   If I had a banner up they we defiantly be asking about that. Keep in mind when I shopped around for merchant accounts I was looking for the lowest cost.   I tend to think most people do not know what rates to look for.  For me I can’t say I did either, but I am well aware of what percentage of my client billings are taken from me.  I tend to think that whomever companies such as cyberhostpro choose for a merchant really do not care about things such as terms of service and contact information.  I think they are more concerned about what suckers they can get under the high rates and hidden fees.  Never mind you may have absolutely no charge back protection.  Unless a host can adapt beyond such a merchant they will never be able to get into the big leagues of hosting.

Ok the cold medicine is making me get off subject, where is that terms of service of cyberhostpro?

Like prior hosts that are not showing the terms of service up front, they have it at the finale step of ordering.

Notice that was a daily fee.   Perhaps you took off for a 7 day vacition.   During those 7 days you were over 3 gigs of space.  This means you come back to a charge of £210.  I am not sure at this what a pound is to the dollar.  But last I remembered it was about %170 the value of a dollar.  Not exactly a small fee to endure every day.

One finale thought on cyberhostpro

Its a little odd after doing a post on manashosting, that when I do a review of cyberhostpro I find the same exact bot with the picture of a pretty girl thats really not a person that offers you a chat.  Both of which are annoying and bounce around the screen and follow you until you close it.   Unfortunatly I can’t seem to get the same one thats is on manashosting to reappear. 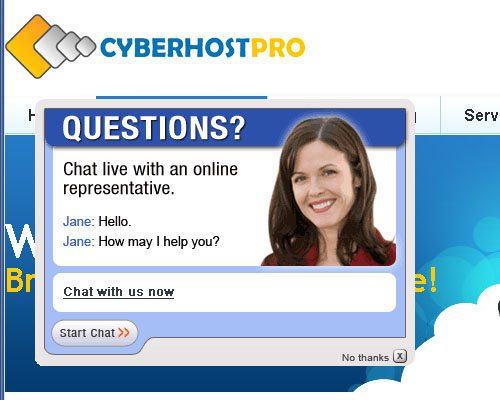 Its almost like Jane works for both Manashosting and Cyberhostpro.