On September  28, 2011 I bought the Kindle Touch as well as the Kindle Fire. The Kindle Touch arrived on November 15, 2011 and the Kindle Fire arrived on November 16, 2011 both less than 24 hours after Amazon announced they shipped (under free 2 day shipping with Amazon Prime). The joys of having a Amazon shipping facility in Phoenix Arizona.  For the next few posts I am going to forgo the usual smashing of hosts that use review sites, hosts that appear in review sites, and the hosts that spam in one or another for the next 7 days to do a few posts on one of my favorite subjects which is tech toys.  After all I got to play with a few since Early October, another such item being the HP Touchpad.

Full Disclosure about my Endorsement of the Kindle Touch

I have placed affiliate links thru out this post, which means if you buy a Kindle Touch or other recommended item via any of the links I placed I get paid a commission.   Unlike the review sites that I rail against I actually use the product(s) I listed.  I actually stand behind a review of a service or item that I provide affiliate links to.

The version of the Kindle Touch I got was the free 3g, without “special offers”.  Those special offers include advertising on your Kindle. I was not really interested in turning my Kindle Touch into an advertising platform. My Kindle 2 has 3g, which I have enjoyed not having to set it up when I take it any where. After trying the Kindle 3 with Wi-Fi I decided I would rather have the free 3g because I am not always near a Wi-Fi connection.  Even when I am near a Wi-Fi connection some can be painfully slow (even by free 3g standards) or disconnect a lot.  That and I may be a bit lazy on connecting my device.  I wanted to be able to synch my library as I like to synch often when traveling, rarely do I buy books outside of home.   Not to mention both the Kindle 2 and Kindle Touch have a browser which while being very slow, can some times helps out when there is no Wi-Fi or if I want another source to see if a web site is down.

Why did I buy a Kindle Touch when I also bought the Kindle Fire?

Most of my friends that don’t read or rarely read don’t understand the appeal of a black and white screen. They did not quite get why I would buy a Kindle 2 or Kindle Touch when I had an iPad or now the Kindle Fire.  After all they are color.  These being friends that will never read Lord of The Rings and other page heavy books, but they had no problem borrowing the deluxe version of the DVDs from me.

For any one that reads as much as I do or more knows It’s not so much the black and white screen, as the long battery life.  Anyone I know that likes to read, and like myself may get less sleep because of staying up longer than usual because of a good book, understands well that a device with a long battery life is better than a tablet that lasts 4 – 10 hours on a charge.

On my Kindle 2 I recharge about every 3 weeks to 6 weeks; whereas I recharge my iPad about every 1 – 2 days.    Not to mention most of the books I read are mostly text and not a lot of pictures.  So there is no advantage of having a color screen to read on. That and while I can read the iPad outside, it is no where near as clear as my Kindle 2 or Kindle Touch in direct sun light.

So after 2 years the Kindle 2 is no good?

Back when I was selling off my shares in 4 hosting companies in 2009, I decided in November to get a Kindle 2, since then I have added over 400 books to it. To be honest I really had no justification for buying the Kindle Touch. Other than a fancy new tech toy, I had no reason to validate a new eReader. The Kindle 2’s battery life shows no signs of decline. With a Speck cover and a proper screen cover my kindle is in the same condition I bought it in. Despite getting a new device I will not be retiring the Kindle 2, and will continue using it at home, while using the Kindle 3 when I travel.  I will not be sending back to Amazon for what amounts to a small percentage of the $280 I paid for it.  They pay $25. Especially when the extended warranty is still in effect for another year or two.

Generally if I avoid leaving the 3g connection on I can go almost a month or longer before having to recharge.  But I wanted one that fits easier in my pockets, even when I am not wearing cargo pants / shorts.

My biggest gripe with the Kindle 2, is that Amazon seems to have abandoned it this year after they put my model up for less than $100 last year for Black Friday which I bought for a friend last year.  I had hoped that like the Kindle 3, they would release a patch that would provide page numbers.  I am bothered by the lack of updates this year.

Despite the lack of updates, the Kindle 2 is still a good eReader which I have had zero issues with.

The positives of the Kindle Touch 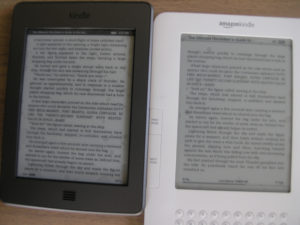 The down side / quirks of Kindle Touch

My recommendations for the Kindle Touch

At this point there are no covers that I can recommend.  Being a very strict vegan I refuse to buy any cover made of leather.  I will at later date post a cover that I find practical for the Kindle Touch.  Currently the one I have on my Kindle 2 is made by Speck which is a snap on shell that has been very effective.

The best screen covers I have found are:

They are a good anti-glare cover, however I find that they are near impossible to get the bubbles out.  Despite that flaw they are a good protection for your Kindle 2, Kindle 3, or the Kindle Touch.

My personal thoughts on Kindle Touch

There are many reasons I went from paper books to an eReader.  One of which is that I did not want tree to be cut down to provide me with reading material.  Then there is that part of me that that is a tech geek / data hoarder. On top of that I have not exactly gotten a permanent residence yet.  I would dread having those to lug another 400 plus books, another reason I stopped buying cds and went to buying mp3’s.  I can’t say saving money was the reason that went with an eReader.  The Kindle Touch is a tech toy I recommend if you like to read a lot.