After almost a week of play I have to say my original assumption of the Kindle Fire is pretty much the same.

The first thing that came to mind with the Kindle Fire was not so much a productivity tablet, and after weeks of viewing the app store I can’t say it even looked like a gaming platform.  My thoughts were a mobile media extender.  After all I have purchased as of this date 435 mp3 albums from Amazon and Amazon is allowing free unlimited music storage for those that purchase 20 gigs or more (Just $20 a year). Which means I will have an online library of 3,000 albums. Then I have Amazon’s Instant videos (formally Amazon Unboxed) if there is a Doctor Who episode for sale I own it (one can only hope that those up for rent only will be purchasable).  Then there is my Kindle library that I have been building up for the last 2 years of 432 books as of last count. All of which is available via the Kindle Fire.

But there is more, after all I also have Amazon Prime.  In the past that meant I could get orders for free in 2 days, whereas without the membership I had to get $25 in a order to get free regular shipping.  But now it means a sort of Netflix like video access.  Plus as of October the ability to borrow a Kindle book each month. Which gives the Kindle Fire a bit more, I can only wonder if Apple will have a similar offer.

With my last review I compared the Kindle Touch against the Kindle 2:

This time around I will compare the Kindle Fire against the iPad 1 (64 GB).  Most of my friends that know me, know I am not big fan of Apple.  From Apple’s “I’m a Mac” commercials to their cult like stores (yeah I said it). To date iPad is the standard for tablets, hence why I have one.  But I gladly welcome another company.  Last year I had hoped that it would be HP, but they post phoned till this year and then jumped ship.  Fortunately a few months ago Amazon announced they were going to get in the tablet business.  Amazingly they released a day early, and not to mention a full 8 days early on the Kindle Touch.  If only a certain game company would release things early (*cough* Blizzard *cough* Diablo 3).

Full Disclosure about my Endorsement of the Kindle Fire

I have placed affiliate links thru out this post, which means if you buy a Kindle Fire or other recommended item via any of the links I placed I get paid a commission.   Unlike the review sites that I rail against I actually use the product(s) I listed. I will not tell you that a product is good just to get a payout. I actually stand behind a review of a service or item that I provide affiliate links to.

I can honestly say I am not disappointed in the Kindle Fire, despite its short comings.  After all this is Amazon’s first attempt in the tablet industry.   With my experience of the Kindle 2, there was only one short coming and that was it did not have any pages numbers.  The Kindle 2 was not bad for a second generation device.  I am willing to bet with the second generation of Kindle Fire the short comings will be far less than they are this time around.  Never mind that a lot of the short comings could be remedied by updates and more apps becoming available. Despite what I have read from other reviews I have not had any crashes.

The only software with the Kindle Fire that I have had issues with is Comics, I have had two Doctor Who comics that I purchased and had to contact this third party who has no access to my order information. It took 5 days for them to correct the issue. I was going to go hog wild and order all of the Sand Man series.  One problem is there is no direct link to purchased items, hopefully they fix that later.

I am not too happy about 8 gigs of space, or the lack of a memory card slot on the Kindle Fire. But then again its only $199, compared to $900 I paid for my first tablet. But it would be nice to store more for periods I may not be near an internet connection.

Battery life on the Kindle Fire seems to be about 4 hours when playing games (more like 4 hours of Plants versus Zombies), but as far as checking email, reading books or magazines, listening to music and browsing the internet I get about 8 hours.

While browsing the software I found interesting software that allows me to see the strength of my Wi-Fi connection.  But I am still playing with some of the productivity software such as Documents to Go.  Not really much of an opinion on what’s available for the Kindle Fire, I’ll comment later on an opinion. What notes software I have found does not auto save, it requires you to manually save unlike with my iPad and iPod touch that allows me to write a note and close the app to open back up where I left off.

I also subscribe to a few Magazines Men’s Health that are only available to the Kindle Fire (which I unsubscribed from once I saw it was almost 90% ads), Rolling Stone (which lead to me buying a book called Free Ride, a review on that at a later date as it has reverence to this blog), PC Magazine, Popular Science, and Popular Mechanics.  The neat thing is you can switch between page view and text view.  Page view gives you that glossy magazine as you would see it on the stands, where as Text view gives you a view that focuses just on the text of the magazine.

The Positives of Amazon Kindle Fire 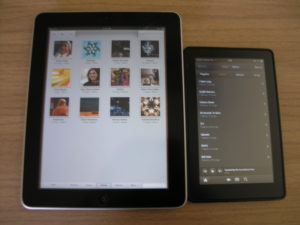 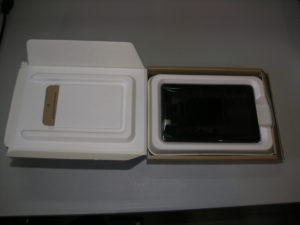 The Negatives of Amazon Kindle Fire 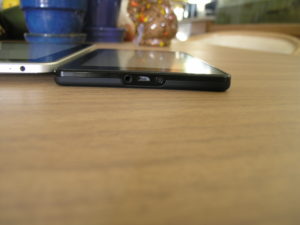 Despite not being a direct by product the Amazon Cloud still needs work:
https://hosting-reviews-exposed.com/?p=2427

Perhaps its reverse psychology, as my mother can often take the counter point of any argument.  But my recommendation to her is that she go with an iPad.  After all she has a iPod Touch, with a lot of software.  She is also someone that can be cheap on a lot of things. But after handling the Kindle Fire she wants a Kindle Fire now.  Maybe it’s me recommending something familiar (reverse psychology), or perhaps just the weight of the device versus the iPad.  Not to mention the cover I have on the iPad seems to double the weight.

On my iPad I have an Otter Box casing:

I swear it doubles the weight of the iPad, however it is the best case that I have had.

Unfortunately I cannot at this time recommend a Kindle Fire cover that is not leather (As I am a vegan) that is up to the standards of the Otter Box cover.  I can only hope that they will come out with a better one later.

For now I can recommend a cover that can provide some protection.  Which is by Marware, but in my opinion the cover for the Kindle Fire is overpriced.  But some protection is better than none.  Another thing that bothers me is that while the outer packing is paper printed with soy ink, the divider they inserted in the cover is not an earth friendly option as you can see from the gallery I posted.  It could have been cardboard, corn starch peanuts, or some other bio-degradable option.  Especially for a company that states: “At Malware, we are committed to providing innovative and affordable products that create customers for life, promote environmental  awareness and enhance the communities we serve.”  So why not so earth friendly packing inside the envelope?

However Marware does provide the best screen cover for the Kindle Fire, and with zero bubbles.

If you are looking for a screen protector for the iPad I recommend:

Finale thoughts on the Kindle Fire

Despite draw backs like the limited memory, no memory card slot, and a limited amount of apps.  If the Kindle Fire follows the same rate of progress as the Kindle eReader it is bound to be a good substitute for Apple’s iPad.  Especially considering the cloud storage with Apple is more expensive (Amazon is $1 a gig, and Apple is roughly $2 a gig).The next review will be on iPad 3, and hopefully Kindle Fire 2.