Chances are if you watched anything in relation to Dunkin Donuts last week, you saw what is one of the worst kinds of public relations a company could have. Clearly I am not talking about Dunkin Donuts having a bad week, if anything they had one heck of a great public relations week. Abid Adar (the guy behind the counter that had to deal with Taylor Chapman) may have cost the company somewhere in the neighborhood of $10 – 20 to try and appease someone that was impossible to please.  Yet he brought the company good public relations on rather tiny budget.  The company I am referring to that had a bad pr week is the one that Taylor Chapman worked for: Powersalesteam.com.

I ended up watching that Taylor Chapman posted because I later found out she worked for a “SEO” company. So like Mindshark.ca I had to look at stats, but more about that further in.  As first I would like to cover why I don’t think the customer is always right.  Taylor Chapman is the perfect example of why you can’t please all the people all of the time. For some time I have wanted to address this.

When people post their reviews about a hosting company, I sometimes get complaints from people about a host and I get told “the customer is always right”. I guess since this site is a customer advocacy site some people think I agree with that train of thought. But I am a business man and I don’t agree, if anything people like Taylor Chapman come to mind as those that I have constantly rejected as being a customer. Honestly I don’t think I would have near the patience that Abid Adar has.  When I ran a hosting company I would literally send irrational customers packing.  If I had found a customer like Taylor harassing my staff I killed their site. As they broke the terms of service they signed up for. Most hosts have this in their terms of service.  But really Taylor and those like her are not customers; they are a drag on productivity.

Sometimes customers that I had like her would as their form of revenge would take to forms and review sites to bash my company. It probably would of helped them not to be irrational, as it backfired on them, but no where as well as it did with Tailor Chapman. She thought she would try to video her experience in hopes she could somehow hurt Dunkin Donuts, all because she did not get a receipt.  Dunkin Donuts policy is the meal is free if the customer does not get a receipt.  Which has happens to me every so often, but I don’t actually care if they don’t give me one. As it generally takes time to fix a mistake, and I worked in fast food at one point in my life. So I have sympathy for those that have to work for minimum wage to make a living. So I tip nicely and avoid anything that might cause management to come down whoever helped me.  I don’t think Taylor has had a retail job, perhaps I am wrong.

Somewhere at the start of the video she claims to have gotten a lawyer. Which is pathetic.  I have over 10 years of running a hosting company. So I have had my fair share of people who pay less than $10 a month for hosting, that turn around and threaten to have a lawyer come after my company. If they had to deal with a lawyer, they would realize lawyers are not free.  An estate issue I am currently going through I had to plop down $1,500 just to start with. My sister has a lawyer that bills her $75 for every letter he sends out. But that is beside the point, as while she is telling them she has a lawyer, a young man named Abid Adar (who should be employee of the month if not year) is calmly trying to accommodate her. Yes I know he could of asked her to leave, or called the police. Yet I honestly think he did ultimately the best thing one could do, as this all backfired on her. For 8 minutes and 18 seconds you hear a triad crap come out of Taylor’s mouth which gets worse the further end you go finishing off with racism.  Which is the main reason I don’t post the video here. Keep in mind she had a job in public relations and a business degree that she ruined in a matter of minutes.  Clearly she thought that everyone would take her side as she posted the video that went viral, which enraged “the internet”. She has a long path to redemption.

Powersalesteam.com is a “Internet Marketing and SEO”, or as they claim”#1 Internet Marketing SEO“. They had Taylor Chapman as a spokesperson for their advertising video’s. I am not exactly sure how her video got on YouTube since she claimed to be posting the video to Facebook. Which as me wondering if someone else did that was on her friends list. But at some point it hit YouTube and spread like a wild fire. It did not take long before we knew who her boyfriend was and soon who she worked for. Some people (who should be ashamed of themselves) took it upon themselves to contact the company in a uncivil manner. Which is the point where Powersalesteam.com a marketing site had been handed lemons, so they should have made lemonade right? I can tell you there could have been no better time given the companies condition before Taylor gave them national exposure.

I am a graphics guy; I don’t do the SEO part of my business.  I will not make any claims of being an SEO expert, in fact I would go so far as to say that I had everything I know about SEO beaten into me by some of the best. The only site that I am actively running right now that I do the SEO for is this one. So it really is bad when I can pull off better search engine rankings without help from my own experts than a company claiming to be “#1 Internet Marketing SEO“. After all their Google page rank is 1, and their Alexa score is 3.4 million. As I have stressed many times before the lower the number the better when it comes to Alexa. Based off that data alone it’s not worth the bother to go over the rest of their stats. Never mind that the design job is poor, also not worth the time to go over in detail.

They don’t even know how to make video advertisements for their customers.  Never mind that is one major focus of their business. As one commenter on this whole fiasco stated, they could take a better video with their iPhone than this company. Which is true as they don’t shoot most of their videos in wide screen, and the quality of the videos are less than that of an iPhone. One of the videos I seen had audio not synched with the video. They don’t even have their own YouTube channel; their videos are on Worldhiphopreport.com (whose site’s stats are worse than Powersalesteam.com).  Also the opening video (which annoyingly starts the moment you load the page) on the main page for Powersalesteam.com was shot in really bad lighting.  The video that has Taylor Chapman looks like it was shot in the 70’s and the back ground noise is awful.

But speaking of Taylor’s video the page that show cases the other professionals has some poorly edited out Taylor Chapman spots.

Also for the life of me, why would a company that claims to be “”#1 Internet Marketing SEO“” have Google Adsense on their site? Google is generating ads for other SEO companies on their front page.   You can’t take this company seriously when they are advertising for their competitors. Yes I have Adsense, but I am not selling anything. Which is why Adsense works for my site.

Now while I thought Tailor Chapman was a real piece of work, Mr. Williams whom I assume is the owner may actually be worse. The worse mistake by far that Powersalesteam.com did was having a graphic of the person they fired with a customer’s web address. 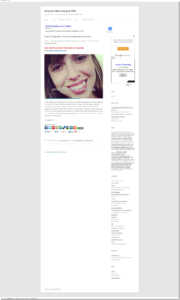 If it was me the first thing I would be doing is removing and replacing every single commercial that had Tailor Chapman in it. Yet the decision was to take short cuts and grab whatever picture they could find of her (a screen shot of video clip it seems). While this customer’s web address is shown during the company’s official response they decided to play the hate messages that were left on their answering machine. I am pretty sure that the customer they listed is also getting nasty phone calls because of this lack of foresight.

If anything I would have had a rep of the company in the video, make it clear and short that Taylor Chapman was let go because she does not understand that public relations is important to a marketing company. Playing the hate messages to “the internet” and being snide about it is only going to make matters worse. Powersalesteam.com had a chance to turn lemons in to lemonade given their poor traffic stats, yet they would rather have something vile instead.