At number 20 out of 25 from Webhostingstuff’s May 2010 list we come to Indichosts.

Starting at $1 a month you can get hosting from Indichosts,  order now

This graphic on their main page  is the first thing that sticks out to me when I visit their site.   I clicked on it because I wanted to see how many years it took to get $1 a month.  The problem is the order now button takes you to a plan thats closer to $10 a month under a three year term.   There is no option to pick another plan.  You have to click on the tabs below the penguin to find a plan thats  “at $1 a month” .

One of the things I have done with almost every host is read the terms of service.  You simply can not find it from the main page.  I tend to wonder if their credit card processor bothered to look at the site.  Because every merchant I have gone through looks for that.  Its never been my experience that PayPal looks, you think they would in order to add that sense of being a more authentic website your doing business with.     In order to find the terms of service, you have to go through the order form and at the point you enter your credit card you get do you agree with the terms of service check.

I am not sure who looks under the about page to find terms of service.   But obscure terms of service and not so clear order now to get hosting at $1 a month is not the most interesting thing about this site.

On this page I find no feed back, for that matter I find nothing but praise.   I imagine any negative feed back is deleted as opposed to a page that would lead people to believe there is nothing wrong with this host.   There are people that are complaining about this company. 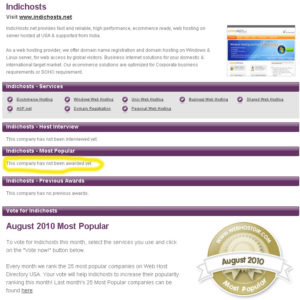 Would it surprise you to know I too have an award with Websitegrader.com?

I don’t think Indichosts is using the actual code like I have done.   Right now they actually have a 97 instead of a 96.   But here is the thing about Web Site Grader, it has nothing to do with how good sites service is.  Unlike fake review sites websitegrader.com is a site that tells you how you are doing in regards to search engine ranking.  They get their money by telling you how to do better.   I actually plugged a few of my own sites in and I have found several sites that need improvement.  I may very well try websitegrader out later

There is alot of faking going on with Indichosts.   For one they claim to be around for 7 years.  But the whois information says that the domain indichosts.net was created back in 2005:

On top of that they are using webhostingstuff.com, but for some reason Indichosts does not bother to use the award they paid for amongst the award they did not win and the award that anyone can get.   Hosting with Indichosts would be a gamble in my opinion. 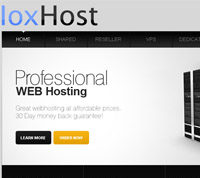 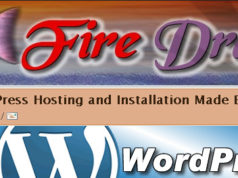