Wooservers.com is my forth and last host review of 4 hosts for November 2010 webhostingstuff.com’s top 25.  What I find interesting when I saw this site is its a little over a year old, yet they have 7 reviews with webhostingstuff.

Those 7 reviews came over a 5 month period of time (August – December 2010).  I can tell you right now that only 3 of the those 7 reviews are on the same network as Wooservers.  One of the reviews may very will be a fake, as the domain for the review does not exist.  Even though they are only a year old they have a rather impressive Alexa score of 70,193.  Its taken me 3 years to get down to 241,000.  Keep in mind I am no SEO expert, my skills in the hosting industry are primarily customer service, dealing with suppliers, and staffing. 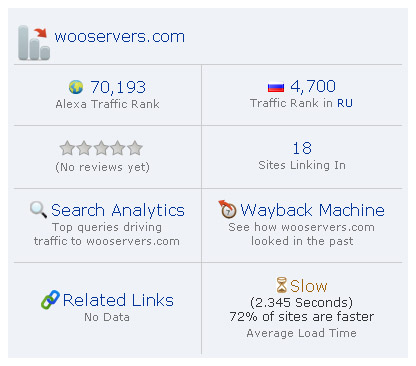 Despite having reviews that leave me skeptical about this company, thats not the biggest concern I have about Wooservers.com.  My problem is I see BurstNET as the  network provider.

I had to wonder why I was seeing burstnet network behind 3 of the reviews.  Honestly I had thought all of the reviews may have been fake.  But then I found this:

It appears that Wooservers.com is a reseller for Burstnet.  Normally I would not make it a point that someone is a reseller, unless I thought there were a hosting reseller on a shared hosting account or abusing a system that they are using.   But this is different, this is simply one of the worst companies that I have ever dealt with.  Back in the early part of the last decade they were my third attempt at finding a viable cPanel provider.  Viable is not a word that is fitting for BurstNET.  The first time I was with them it was like pulling teeth to get support.  After three months I had canceled the two servers I had with them after it took them 7 days to restore a server.  I am also not sure if they had caller id or what but most of my calls met with an answering machine, some times it was full.  Despite my objections my business partner decided to try them for a second time 2 years later.  That lasted 2 weeks, as the server we got with them had 2 consecutive defective hard drives.   My business partner got to find out first hand what I had to go through to get someone on the phone and agreed with me that this company needed to be on a permanent ban list.

My own history with BurstNET is a blog post in itself.  I am honestly surprised to see that they are still in business, it boggles the mind how anyone that practices business like they do can stay in business for almost 10 years.  If you doubt that I know what I am talking about I suggest going to any search engine and enter “burstnet sucks” or any other combination of a negative word with Burstnet because you will find tons of reasons why you should avoid anything that involves Burstnet.

Despite being at least 5 years since I have been with BurstNET it does not appear that they have changed at all.  For that matter the site seems to look like it did when I first signed up.  I don’t know the full details of the relationship between BurstNET and Wooservers.com.  It safe to say that if Wooservers.com is reselling any BurstNET service your not going to get timely support.

But there were those Wooservers.com reviews…….

Despite having burstnet on 3 of the 7 reviews, there are 4 reviews that also leave me skepitacal of this company.

Due to the relationship WooServers has with BurstNET I have to recommend avoiding them like the plague.