This is a bit of an odd month to review webhostingstuff.com.  I am not referring to I7net coming back, though it would be fun if it did.   But at various points this month I found that this so called review site that  inspired this site had less then 25 hosts, in fact at one point it had only 19.   Though the only point where it was 19 was an iPad.  Perhaps Michal Low did not design for Apple Safari internet browser?  But every snap shot I got of webhostingstuff.com from this month has had one host in the the 10th and 11th spot. Keep in mind I have been getting screen shots from about 10 different sources. After 16 days (perhaps longer) I figured this would be fixed.

Also its worth noting ioxhost.co.uk is now off the top 25 (well 24) list once again.  I got flack from for posting the owner’s emails to me because he decided to go back to webhostingstuff.com, and choose to ignore my emails asking why.  Despite the threats and lack of reading by many of the fans of ioxhost.co.uk my last review of their site will be my grading system review, which I still need to work on.  I have been told that I should go after bigger fish.  If a lie is small or a lie is big, its still a lie.  Webhostingstuff.com was one of those king makers of hosting review sites, now its so desperate that it will allow one of the new hosts on my list to be online for less then 6 months.  But to be clear I never accused ioxhost.co.uk of fake reviews, I had my suspicions because of the whois, however the owner explained that with the lose of the original domain.  However nothing ethical or logical can explain why they were on the top 25.

Its worth noting that Hostgator.com is at 39 reviews, for such a large host its amazing that they have not had any new reviews since I first started my own reviews.  As stated its my opinion that webhostingstuff.com has hostgator on their site as an affiliate.  I tend to question rather whs is screening comments before allowing them to post.  You would think for such a large review site they could tell you how many reviews they get in a day.

Myhosting.com is now off the top 25 list, rather short amount of time for a host that is popular in many so called top 10 sites.

The other notable thing is that iweb Technologies Inc has a 3 star out of 5 rating. 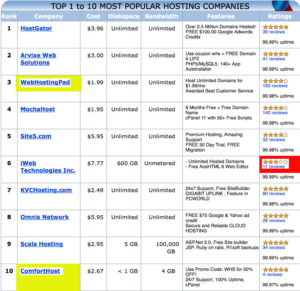 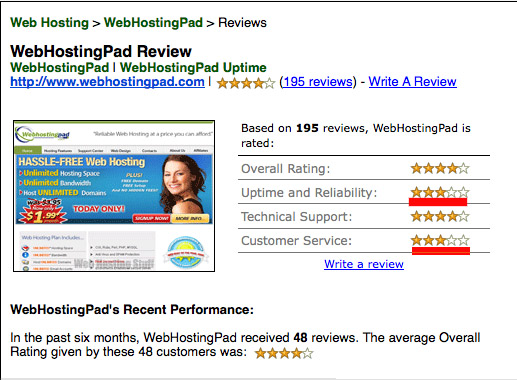 The two things that I find a problems is out of 48 reviews they got 3 out of 5 stars on Uptime and Reliability as well as Customer Service.

You can find this host on many so called top 10 sites.

But this qoute from allreadyhosting.com

“I too have had a lot of trouble with the WebHostingPad affiliate program, I have not been very impressed with them in the past but recently they got a new affiliate manager. The new manager seems to respond a lot more quickly than the old one; however, I still think they have a lot of work to do.

I think I will look into their affilate program. 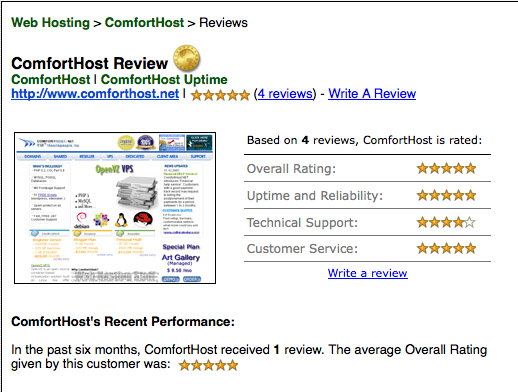 4 reviews, all five stars.  Granted my first thought was to look at this host.  I hate being a nit picker on grammar and spelling, as some of my posts are far from perfect.  But some of the text does not sit right with me.  Review wise they have 1 review back in November 2010, before that it was December 2009.  Off the top of my head I don’t think the review look fishy because they are spread out over the coarse of 3 years.  But I will be looking at them to see if the people that posted the reviews are still with this host.

This host shows up in both the 10th and 11th spot.

2 new host, and one host that was in the 10th spot is in the 11th spot.  Infinite Networks has a 2 star out of 5 rating, and Yaspe has just one review. 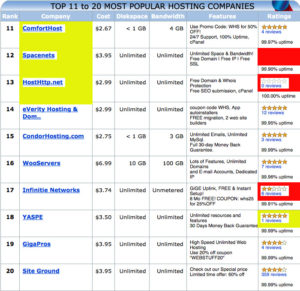 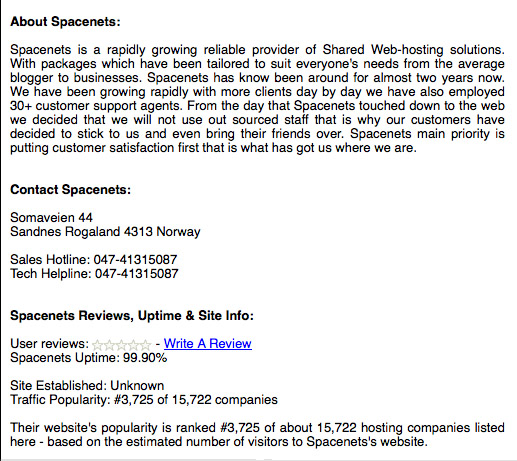 Zero reviews has me asking one question, how long have they been online?

The creation date for this host is October 24, 2010.  Another host that will be on my watch since they are new, and find themselves on the top 25 (well 24)

I really hate to say a host name is lame, but this is a poor choice.  Sure its 8 letters, its also a domain that was created in 2004 all of which are a plus.  But most people even know what http means?  If you want to know what it means, it stands for Hypertext Transfer Protocol.  Zero reviews and traffic popularity of #4,207 tells me that the it may be a old host, but its not doing much to attract attention.  Also that phone number you see above, its not a valid phone number.

Interestingly they have no data at http://siteanalytics.compete.com/m/profiles/site/hosthttp.net/nodata/

The last 5 on this picture have either no reviews, 1 review, or 3 stars rating. 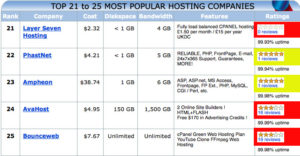 Here is hoping I can finish reviewing 4 new hosts with webhostingstuff before the end of this month.