Unlike last month where there were no hosts to write a hosting review on,  webhostingstuff.com offers me 3 new hosts  for April 2011 to write a hosting review on.  Not to mention a point where they deleted negative feed back for one of their so called “advertising” customers.  Webhostingstuff.com is still blocking me from reading their hosting review site, but  that does not mean I don’t get screenshots.  Some of the most interesting shots (asides for proof they remove feed back) have me wondering if they bought advertising from webhostingstuff.com because they recently had down time.  Another host I have not even looked at and will get more insight when I write up this surface report, or perhaps when I write up its indvidual post.  So in sum 1 host had its negative feed back deleted, 2 hosts had a recent sting of downtime, and 1 host that I see nothing on the surface.

Webhostingstuff.com’s Hosting Review for hosts in the 1 – 10 spots for April 2011 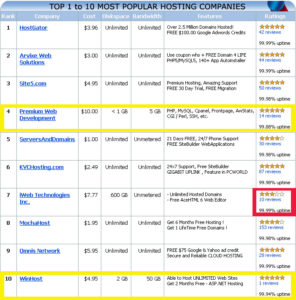 Off the first 1 – 10 hosts I have 2 hosts to write a hosting review on.  If I I could get away with it I would have someone get me all the screen shots of all the reviews for Hostgator, at this time they only have one negative review, but I tend to doubt that when you average the reviews that they have a 5 star review.  Iweb.com on the other hand for some bizarre reason is still on the top 25 list despite our previous discussion.  The problem with him purchasing advertising is that it outlines his customers complaints.  What is the point in having a hosting review site show case your site, when its only averaging 3 out of 5 stars?

There are many parts to this host that I can say I don’t like, most of which from the main page of that site that I will cover in my post.   The network whois tells me that they are hosted on theplanet, though I suspect they are a Hostgator.com reseller.  But here is the first host that makes me wonder if down time may have been a cause for buying the so called “advertising” with webhostingstuff.com. 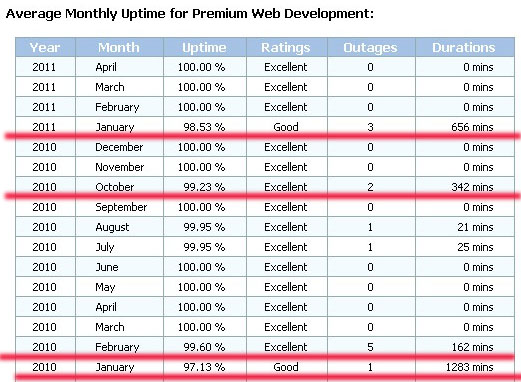 Though if you understand how Webhostingstufff.com tracks uptime it may very well have been more then what was listed.  Supposedly the system they use pings a site every 6 hours or so hours.  If it pings a site that is no online it amps up the frequency of pings till the site comes back online.   I have heard some people say that system will logically track any down time.   But here is where the logic comes apart, what if a cron job crashes a server and the server is brought back up between the pings.   I had a few dedicated customers that had this problem, where they had purchased a third party back up script, and when 3 am came around for some bizarre reason 5 dedicated servers crashed in sync.  After three days and 4 hours of down time a day, we had angry customers that demanded we fix the issue, I also had a ulcer developing from fear of defective equipment.  Further investigation proved it was not hardware, but a software issue.    But down time can mean nothing, after all I never hosted my clients on the same server as the hosting companies site.  In some cases a hosting company may have been on more then one server.  Still I had a lot of reasons for not housing my customers on the same server as my site.  I suspect that Premiumwebdesign.com is a hostgator.com reseller, so their Premiumwebdesign.com’s down time is their customers down time.

What sticks out to me is that there is only one review, but the whois says this domain is 10 plus years old.   Webhostingstuff.com says that uptime has been tracked since September 2009.   If you look at the waybackmachine for July 2007 you will see that this domain had one of those pay per click place holders.   It also shows a graphic that says the domain may have been for sale. http://classic-web.archive.org/web/*/winhost.com

Since this is a host on webhostingstuff.com, lets see what the reviews……….. I mean review has to say. 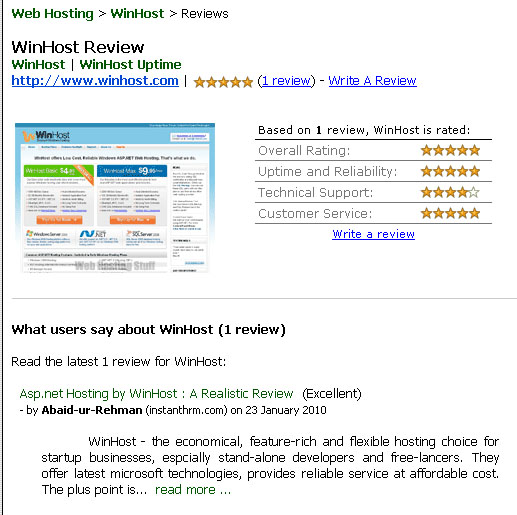 So its been more then a year since they received a review, and the who is information says this domain does not exist.

Webhostingstuff.com’s Hosting Review for hosts in the 11 – 20 spots for April 2011 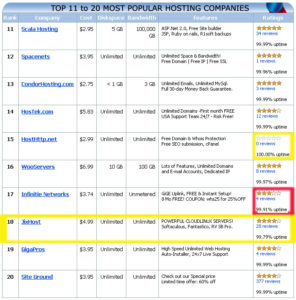 Here comes the proof that Webhostingstuff.com deletes negative feed back for paying customers.  If you look at Infinite Networks You see they have a three star out of five from 4 reviews.  Problem was when I found them in October 2010 they had 4 stars and 6 reviews. 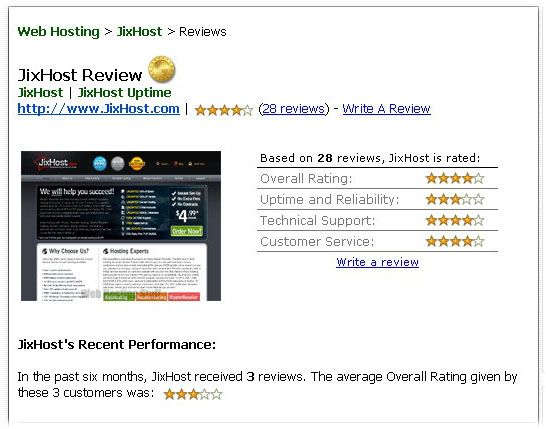 Webhostingstuff.com’s Hosting Review for hosts in the 21 – 25 spots for April 2011 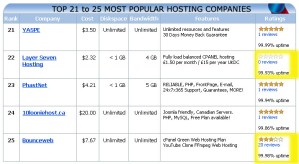 While webhostingstuff.com wants you to trust them I am going to show they don’t know how to  make a reliable hosting review site