Hosthttp.net is my Forth and Last host review of 4 hosts for February 2011 webhostingstuff.com’s top 25.  This is pretty much a repeat of the last review.  In regards to a website that appears to have just come online.  So I guess I will follow the same formula.  The one big difference between these two hosts is this host’s domain was purchased back in 2004.   I think this is a aged domain, because it does not appear by any of the sources I check to see the traffic of a site that this site has been active until last month.  Webhostingstuff.com only started keeping track of the uptime as of January 30, 2011.  Sure I mentioned this was not really a domain that I think was a wise choice.  Sometimes I think people choose a domain just because its short rather it has any meaning at all or not.  Several of the host I have reviewed fall in that category.

From the about page I get a few things.

1. There not quite aware of what SEO and search engine submission is.   One merely submits your site to search engines, but that does not guarantee traffic.  The other depends on several key factors about the site that make it liked by search engines.  Granted my SEO expertise is limited to the help I get from people I pay and the advice I have been getting.  But I know enough to know that they are using SEO merely to draw people in like myself that may not know better.

2. That phone number is not valid, I tried to call it myself and I got an invalid number.

3.  The rank of 4,207 out of 15,718 (it was 15,722 but it seems Webhostingstuff.com is in the middle of cleaning house) sites seems a strech, though I have to wonder if webhostingstuff.com is basing traffic popularity off of Alexa Rank.  Remember the lower the number the better.

Its pretty close.  Just in case you think that the popularity some how computes into validating this top 25 list you should see the first post I did that looked into webhostingstuff traffic popularity.

Also lets look at siteground.com since they are on this top 25 list with hosthttp.net.

Turns out that Siteground has a phenomenally lower rank then Hosthttp.net, for that matter is lower then webhostingpad.com.

So far there is only two sites out of all of those I listed that do not tell me that webhostingstuff.com is not basing their own traffic popularity off Alexa. 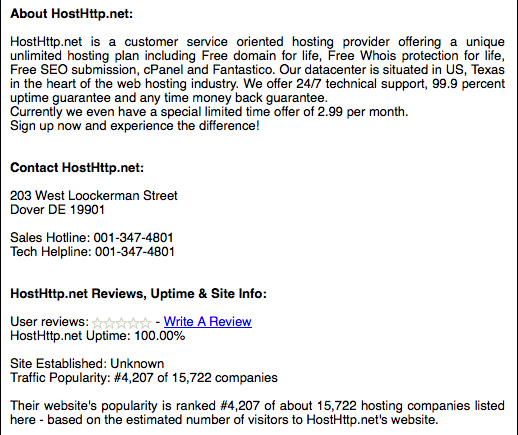 By the time I found this host it had not even been online for a month.    For some reason none of my friends have been able to get me a screen shot of the webhostingstuff.com uptime for hosthttp.net, so I am going to just post what I can get from Google’s cache.  This site just started being monitored within days of me finding it on webhostingstuff.com.   That “advertising” really must pay off. 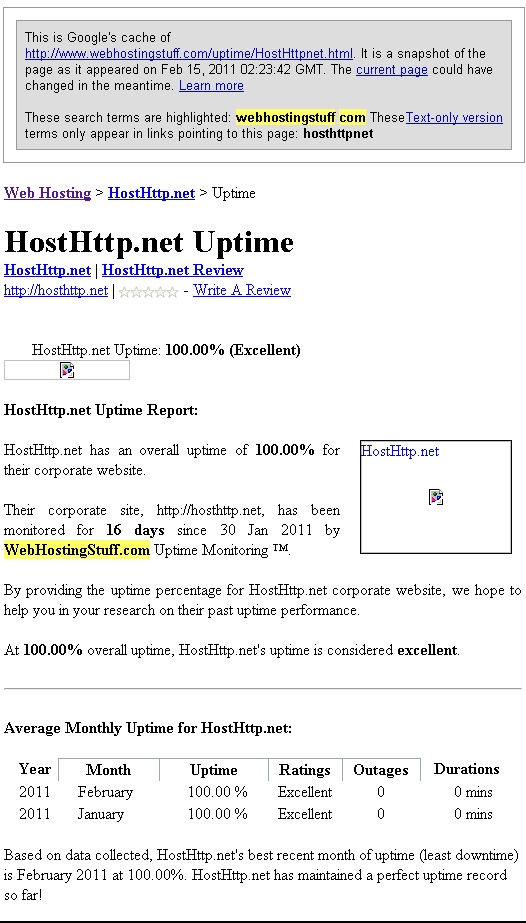 I have to ask how did Hosthttp end up on webhostingstuff top 25 (like I really need to ask)?