Netmar, number 24 of 25 for Webhostingstuff.com’s  May 2010 list.  As of today they are now number 9.  So they are paying more for a better position in the Webhostingstuff listings.  Their design seems dated,  no telling when the last time the site had a face lift.  According to them they have been in business as of 1994, and the domain creation date backs them up on this.  But their about page makes me suspect that have not been in the webhosting as lon.

“Netmar is wholly owned and operated by the Akinli family of Durham, NC. Established in 1994 as the company behind the Tarheel Mall, we quickly discovered that the online mall concept was not going to be around for long, and abandoned it in favor of straight website hosting”

This is another company that I have to wonder when exactly they got into the webhosting business.  Like the last host I reviewed there is not alot of information on this host.  For that matter alot of hosts that do reviews have no reviews from this self proclaimed oldest host.

The oddest thing I found while looking for information on them:

This time I started looking over the info on webhostingstuff in regards to Netmar.   While I am sure they erase the info that does not work in their favor they are sloppy in how they do it.   There is a lot of incriminating information that is often left behind.

One Netmar review sticks out

Looking at the reviews I can tell you they should not have a 5 star rating. 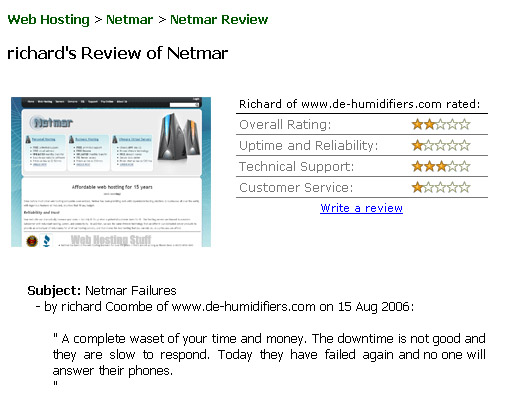 Some how with 6 reviews one “poor” review can not keep this host from being listed as anything less then 5 stars.  I also find it hard for this review to have 3 stars on tech support considering that is what this complaint is about.

Curiosly Netmar’s first review was August 15, 2006.  However their uptime records only go to Febuary 2010 of this year. 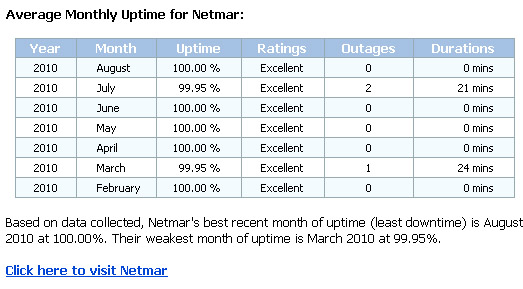 I suppose you might thing that webhostingstuff only keeps track of this much information on all hosts, but clearly not the case if you look at HostGator’s uptime.

Hostgator’s uptime history goes all the way back to September 2005.  I would expect that webhostingstuff would have tracked the uptime no later then Augusts 2006.

My Finale thoughts on Netmar

They have moved from the 24th to 9th position, but they appear to be behind the times.  It does not appear that they offer a ticket system.  When I first started it soon became apparent that support by email was not going to be effective.  We went to  a ticket system with in the first 3 months of operation.   This is a company that has no visible ticket system:

“At Netmar, we’ve put together a huge repository of online help, but of course, we’re still available to answer your phone calls and emails.”

A support ticket system allows for quality assurance.  For someone like me it allowed for efficient random checks on tickets to ensure that staff are doing their job or that customers are not abusing the system.

I don’t think based on the design of the site that the Netmar is capable of offering a serious hosting solution.