LFC Hosting is number 23 of 25 for Webhostingstuff.com’s  May 2010 list.   As of today, their site is no longer on the top 25 list.   The domain was created in May 31, 1998.  I have to wonder if the design is the original that it had started with.  As much as it may seem pointless to bring up the design, I feel that the design is a sign of how much a company progresses.   I know not every host has their own design team, my own sites went through at least three changes a year.  Not to mention there were changes according to sales events, seasons, and holidays.  We were probable a little too excessive in our changes.  But things like Front Page extensions disappeared from offerings at least 5 years ago.  Things such as WordPress were taking center stage as their popularity advanced.  Clearly LFC Hosting site  is not up-to-date, and you have to wonder are the staff ready for todays hosting needs?     LFC Hosting seems stuck in the past, and I am willing to bet that this site design is at best 7 years old. 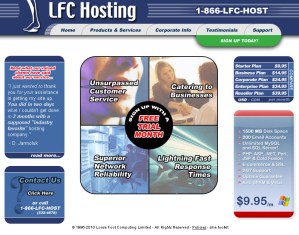 So what makes me think LFC Hosting site design has not updated since 2003?

From LFC Hosting main page I click on “Products and Services”, then click on “Hosting” It brings me to this long unnecessary sales spill about their use of Window 2003.  Here is the part that stuck out to me:

Although we run Windows 2003 in the foreground, over half of our networkis actually Linux. Windows 2003/IIS 6.0 servers are employed in theforeground to ensure optimal performance and stability of Windows capabilities (which typically only work well under Windows), as well as anincreased level of security over a single platform. Then, “redirectors”, router “port forwarding” and proprietary LFC technology “forward” all requests for Linux-specific technologies (ex: MySQL 5 databases) to the appropriate Linux server clusters in the background!

I have no idea what any of that means, perhaps because I am not a server tech (I started this business as a webdesigner so I am more of a graphics person). This pretty much looks like jibberish, and I would never have allowed a page like this to preceded access to the order form. I am also no expert on Windows hosting.  Most of my operations involved cPanel, Plesk, and bare bones Linux.  My preference is Plesk, while not user friendly it is far more stable then cPanel.  So I had to ask a friend that deals with Windows, and he tells me that 2003 is outdated and not supported by Microsoft, 2008 is the current version.  Which I had a feeling 2003 was outdated  as 7 years seems along time for software to last unless its with my parents or a video game.

Is LFC Hosting a stagnant host?

I think the answer to that is yes, while I am not sure how reliable Web-hosting-top.com is, but comparing Hostgator to LFC Hosting I see a huge difference between them.   Host Gator shows no lose in sites but rather gains, where as as LFC Hosting shows points where it was bleeding out sites.  It appears they have no more then 7000 domains.  Which tells me they have don’t have many customers.

A attempted chat with LFC Hosting

Unfortunately as you can see no luck, instead I got the following:

The thought that goes through my head every time I form a business is that most die off before they reach their 5th year. LFC Hosting appears to be a site that has done just that, but only just barely.  It clings to life, even though it refuses to adapt to the market.   I have to wonder how long a host such as this can keep on going, and I will definatly have my eye on it.  Hopefully this post can encourage them to do something.   LFC Hosting should have used the money they used to get in Webhostingstuff”s top 25 for a new design.