Hosting-review.com was one of the review sites featured in my first video.  The reason for a post on this site is a bit of an accident.  After Fatcow (an Endurance International Group) host contacted me to let me know hostingsthatsuck.com had a disclosure notice up.  Which happen some where around the time after I wrote Fatcow, and I was 2 days late from sending my notice.  I thought I would check a few other hosts that were in my sights for for reviewing, Hosting-review.com was one of them.  They do have a disclosure, which I had plan to review.  But the weird thing is their site was okay last night, but this morning without even refreshing their site I get this: 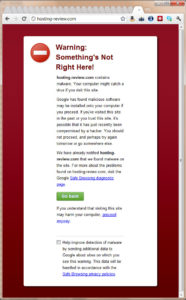 Now this is only for Google Chrome not on Internet Explorer, Opera,  and after having to re install the rather buggy Firefox it was not found there.  Safari is acting buggy on my machine

According to Google in regards to Hosting-review.com

What is the current listing status for hosting-review.com?

Site is listed as suspicious – visiting this web site may harm your computer.

Part of this site was listed for suspicious activity 2 time(s) over the past 90 days.

What happened when Google visited this site?

Of the 45 pages we tested on the site over the past 90 days, 3 page(s) resulted in malicious software being downloaded and installed without user consent. The last time Google visited this site was on 2011-10-12, and the last time suspicious content was found on this site was on 2011-10-12.Malicious software includes 5 exploit(s), 1 trojan(s). Successful infection resulted in an average of 4 new process(es) on the target machine.

1 domain(s) appear to be functioning as intermediaries for distributing malware to visitors of this site, including opienetwork.com/.

Has this site acted as an intermediary resulting in further distribution of malware?

Over the past 90 days, hosting-review.com did not appear to function as an intermediary for the infection of any sites.

Has this site hosted malware?

No, this site has not hosted malicious software over the past 90 days.

How did this happen?

In some cases, third parties can add malicious code to legitimate sites, which would cause us to show the warning message.“

intermediaries for the infection of 1 other site(s) including, for example, hosting-review.com/.

It appears Hosting-review has a Tim Thumb Exploit. 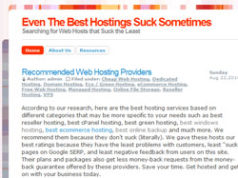