On Sunday Hostingsthatsuck.com decided to retract their approval of Zyma.com.

The original post is gone, though I still have a screen shot. I suspect like several other people that choose to promote this host, hostingsthatsuck.com  had their free hosting account closed down last month.  Now that the gravy train is over, the happy thoughts go away.  Because despite the negative reviews that came in October 2011, Hostingsthatsuck.com did not disclose this email then.

“On October 4th one of the servers (panda) in our network experienced a serious software fault, which consequently lead to an outage lasting a total of 10 days. Our engineers have been working hard to resolve the problem, and we are now pleased to say that issue has now been permanently resolved and that no data loss has occurred. We acknowledge the fact that no information was sent to our customers and we deeply apologize for the lack of information and updates sent to the affected customers regarding this matter.”

Compensation:
We understand that customers experiencing this problem felt alot of anger as they were unable to reach our tech support team during the downtime period. To show our commitment to constantly improving our service, we are now offering all affected customers 2 months of free hosting credit being added directly to their account. To redeem the free credit, simply send a quick email to [email protected] and the domain name that was affected during the downtime period, and we will add the extra credit.

Despite the rumours, the company is in excellent financial standing, and we are no way in risk of any kind of bankruptcy. All customer hosting accounts are 100% safe for the duration of their purchase. We are here for the long run and are constantly striving to improving our services. We don’t overload or oversell the number of hosting accounts on any one of our servers.

Once again we sincerely apologize for all the inconvenience and problems caused by this issue and we would like to re-assure all our customers, that this issue has been permanently been resolved, and will NOT re-occur now or in the future.

Thank you for your co-operation and patience in this matter.

In short Khuram lied to me about deleting hostingsthatsuck.com hosting account and affiliate program. He stated the following on my first post:

Quite frankly, we were completely unaware that hostingsthatsuck.com were being dishonest in their review. We believe that people should write accurate and honest reviews about hosting companies, whether it is good or bad, which is why we have revoked hostingsthatsuck.com affiliate license with us, as well as removed their website from our servers.

If that is true, why did hostingsthatsuck.com get the above email?

It really did not bother me so much that Khuram lied to me, I pretty much figured he did since until this Sunday there was an endorsement page for zyma.com on hostingsthatsuck.com. What bothered me was the lack of disclosure on Hostingsthatsuck.com’s part until February 2012. They did it for what amounts to peanuts in affiliate fees.  After all how much can you squeeze out of  less than $10 a year payment? Unlike your so called top 10 sites, hostingsthatsuck.com can promote anyone that contacts them.  After all that is what Zyma.com did, they sent me the same exact invite that they sent hostingsthatsuck.com.

Instead of owning up to their mistakes they decided to throw an insult my way, without referring who “a grumpy blogger named Benjamin” was, that would be me.

“As mentioned by a grumpy blogger named Benjamin on another website, Zyma hosting is a relatively new and just a small company as compared to other players like Godaddy or 1and1. Benjamin believes that this website should not give recommendation to a new host and we should let the big companies have it all. We disagree with this reasoning for not recommending a company, and we still believe that being a smaller company also means a hosting company may be able to take better care of their customers. So to any angry blogger who believes our method is totally flawed, we suggest you stick with your big companies like 1and1 and we wish you good luck.”

I love how they call me out by name, but they failed to reference this site or the two posts about Zyma.com. Yet I am a grumpy person? I am pretty sure I was fully caffeinated when I wrote every post dealing with them. With no lack of coffee I have no reason to be grumpy. Honestly I like to think I approach topics like this with some level of satire. But the two posts I wrote about zyma.com seem dry in regards to any form of emotion. But what else can Hostingsthatsuck.com do when I am writing counter posts, surely the use of actual facts is not the best way to counter my posts. Like explain to me where it is I said I don’t think new hosts should get a recommendation.

Perhaps Hostingsthatsuck.com are Grumpy Bloggers? After all they had a 10 day outage and probable lost their free hosting account last month.

What did hostingsthatsuck.com leave out?

As stated they left out that this was a new company back in 2011. But there were a lot of other things they didn’t do.  Like tell you what domain they have hosted with them. How much resources they were using.  Instead of giving real data, they gave cropped screen shots that gave little detail and general information that could pretty much cover any hosting company.

Post from last year when Zyma was trolling for exposure:

Post from this year to see where they were now:

If I am supposed to avoid the new hosts, than hostingsthatsuck.com are supposed to avoid the old hosts? Frankly they don’t get the say on who I do a review on, just as much as I don’t get a say on who they try to peddle on anyone that comes to their site. This was not a matter of if this host was new or old, small or big. It’s a matter of ethics.  The author for Hostingsthatsuck.com that wrote the Zyma.com post choose to completely ignores the fact that would not help result in a sale, and that was the fact that this host was new. They choose not to disclose til now that they received an email about the down time in October 2011.  So seriously why did it take this long to share an email from October 2011?

So is Hostingsthatsuck.com right about me thinking new companies should not be endorsed?

New companies have a big challenge of bringing in customers than say a company that can afford to run commercials during the Super Bowl (i.e. Hostgator) or run full page ads in Popular Mechanics (i.e. 1 & 1). Hostingsthatsuck.com used the trick of telling you to search for “Zyma sucks”, and yeah there were none out there at the time. Other than other people trying to pull the same tricks as hostingsthatsuck.com.   Hostingsthatsuck.com makes it a point to be in the top of search results for “(host name here) sucks”. Not so much to provide details about a company sucking, but to get buyers to sign up with the company for what may be peanuts like Zyma.com or big pay like Hostgator.com.

I make it an effort with any review of a new host to point out that if they are new, that should not be criteria to use against the company. New companies stand to lose more than older and bigger competitors with the loss of a single customer. Meaning they have more reason to work on keeping a customer. Not to mention there are large old companies like Burst.net that I advise avoiding like the plague. This had to deal with disclosing details like they had been contacted by zyma.com to do a review, and that they were new.

On a side note a new company is not a bad thing; we all have to start somewhere. This is why I recommend that on the initial sign up that you do no more than 30 days the first time around, and sign up for more time later on. Also a new company may be more eager to work to keep your business, where as a large establishment may consider you more of a number.

The whole searching for bad things about Zyma.com was flawed because there was nothing negative out due to the fact it was a new host. Lack of (Zyma.com sucks) does not mean that the host was good, nor does it mean they are bad.

But even when this “(host name) sucks” is used on old / big hosts hostingsthatsuck.com sales pitch ignores actual facts. There has not been a host yet that they have recommended where I was able to find more negative comments using the same criteria “(host name) sucks)” just going over the first few pages I can find more negative posts than what they say there are. Never mind their claim includes all search results. They want you to look no further, I want you to look beyond what they say.

I want to make it clear again:

I do not have a problem with Hostingsthatsuck.com making money off affiliate programs.

I do not have a problem with Hostingsthatsuck.com referring people to new hosts.

I do however have a problem with hostingsthatsuck using junk logic to make a buck, especially when they ignore the facts. 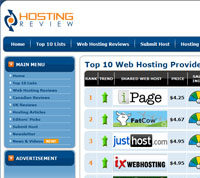