To start with, I want to make it clear I did not go looking for issues with Unlimitedgb.com, they came to me. They choose to create fake reviews on my site.   Which was for the purpose of bringing increasing their back links and search engine viability. I can’t say if they had planned on purpose to post on my site, or if they targeted any forum or blog with hosting as a topic.   But I can tell you like many other sites that post any negative feed back, they are ready to try and drown out the negative with fake positives.  Which you can see at my first post:

For which they choose to create feed back, in most cases not giving out domains.  In one case two different endorsements came from the same ip.

Last week the CEO decided to contact me, not to fix things but to get me to remove my page.

Per usual red text is who is responding to me.

Blue text is me.

Before I responded I thought I would make it clear before hand I was not going to be paid / bribed to remove a post.

I had no intention of taking any money to remove my post.  But I was curious to see how much he would offer.

I honestly did not expect a reply.  I thought maybe, just maybe he was watching my twitter feed.  As some companies do.   But he did skip over the part of my contact form that states “If your a host that is contacting me about one of my posts I will post any and all emails directly to the blog post associated to your contact.“.

My curiosity had reached its limit, I made a quick post hoping to get him to engage him in dealing with his customers problems.

Of coarse after three days, Sanson choose not to respond to me.  Never mind I offered to provide free mediation with prior customers.

After I did the last post on unlimitedgb.com I thought I would try the chat out.  Turns out this is the screen I got most of the time: 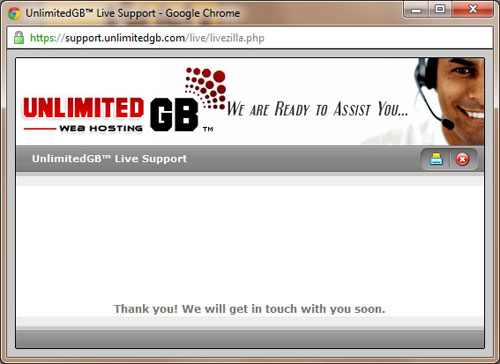 By Monday I sent a response:

12 hours later and on my 18th random attempt I finale got a hold of a tech named James.  I seem to have misplaced the chat. In short I asked to speak with Sanson.  He got back to me quickly right after.

A Finale Email to UnlimitedGB

I doubt that there will be any more response from Sanson

There is a reason I stated that I don’t think the site was active since 2009, part of what drew my interest was a review that said they had been hosting with unlimitedgb for more then 2 years.  Which made me look at the whois for their domain.  The creation Date is 28-sep-2009.  Then there is this chart from Alexa.

I think part of what he told me was true, even though he switched 7,000 domains to 7,000 customers. Never mind number of domains does not mean amount of customers.

This response makes me think that he lied about being 2 years old.  After all 900% increase in a period under 8 months. Where as it took them 15 months  to get 800 domains.   But another thing that makes me think they started back in October 2010 is that most of the comment spam began around that time.  Websites like webhostingstuff.com did not start tracking uptime until around this time http://www.webhostingstuff.com/uptime/UnlimitedGB.html, like the one comment I mentioned:

From this point forward if you have a complaint about unlimitedgb I want your support tickets, emails, as well as chat sessions.

Unlimitedgb.com is more then welcome to respond to these complaints, but they are not welcome to post fake positive feedback.

Another post in preparation of Hostgator.com’s Black Friday Special

An open letter to Brainhost.com

A Call to Redemption: Hostgator.com

Unlimitedgb.com – A Call to Redemption