Topgreenhost is my fifth host out of  7 of webhostingstuff.com September 2010 list.  Oddly this site makes me think of hostgator  design.  As you probable guessed its another host that claims to be green.  I call it a green washed company as their big method of being green is energy credits.  So far there has not been a host that I have looked at that does not buy energy credits.  If your read my previous posts on the top of green hosting, you will know that I call this green washing.

Greenwashing (a portmanteau of “green” and “whitewash“) is a term describing the deceptive use of green PR or green marketing in order to promote a misleading perception that a company’s policies or products (such as goods or services) are environmentally friendly.

So about that Topgreenhost EPA partnership

When you click on the EPA Green Power Partner link it takes you to http://greengeeks.com/going-green/epa-partner.php 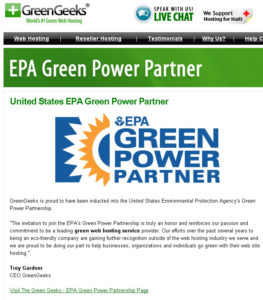 So either they belong to green geeks a host that I reviewed before, or they thought they could piggy back off of Green geeks links.

If you read through you will see I contacted the EPA, and the EPA in a nutshell said.

1. This is a program that allows companies to boast that they buy energy credits.

2. The EPA does not actually confirm that a company is still buying energy credits.  There is a lack of true oversight.

So does topgreenhost belong to greengeeks?

Off to Domain Dossiair where I find that topgreenhost.com is less then a year old: 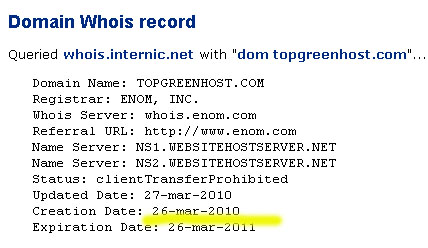 But lets look at the trace routes:

That seems to confirm that Greengeeks owns topgreenhost.  Along with that EPA link.

When I went to http://topgreenhost.com/topgreenhost-green.html I thought this host was similar to some host.  I could not think of who.  At least until I clicked on that epa link which brought me straight to green geeks.  But the trace route makes me wonder if they have their own servers or if they are part of another company.

So why is topgreenhost cheaper then greengeeks for the same package?

I suspect that topgreenhost was made because the unlimited market is extremely competitive.  If you look around enough you find that hosting companies are constantly lowering the price for a unrealistic package.  If you look through the Endurance International Group’s line up hosts you will find the same package ranging between $3 – $20.   As a former hosting provider I can tell you that I encountered a lot of people that were more concerned with cost that an actual service.  The humor of it was the people that claimed to be losing thousands over less then an ten minutes of downtime.  Never mind the hosting account they purchased may have been $1.99 a month.  While cheap does not always indicate inferior service, it defiantly does not guarantee quality service.

So if you must have a greengeeks account, buy from topgreenhost.  Better yet avoid topgreenhost and find a true green host that does not buy energy credits.