Mindshark.ca claims to be a top expert. After all this is on their front page “Home to the latest and greatest Internet Marketing Strategies in North America”.

I am going to boldly say no, they don’t know as much as they claim. From the facts in my last post, I think it is safe to say mindshark.ca knows less than me. If you need proof that I know more than they do just search Google.com for “mindshark.ca”. Yet while knowing more than they do, I would not trust my skills to keep a roof over my head. I realize its harder to prove lack of qualifications, so this is the point where I ask you to take my word for it I am a SEO noob. 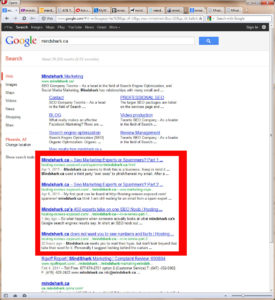 I would go so far as to say they create an illusion to match their own propaganda. This week I got to look at a pamphlet where they tell you 15 things to beware of with other SEO companies. I don’t have time to go through their full list to tell you how they can be graded.  But I can tell you they failed one point and that is “3. Vague & Immeasurable Services”.

Every award every testimonial lacks any tractable data. Clearly there should be domains to look at to see how they are doing. What I have seen and confirm belongs to a testimonial was what was left by a troll for Mindshark.ca, and the Alexa score was over 16 million. Nothing not even Mindshark.ca’s site can measure up to this site. Any reputable SEO company should have traffic stats that would make hosting-reviews-exposed.com look pathetic.

Why is a Seo organization like mindshark.ca being reviewed on a site that is about fake hosting review sites?

The key word here is spam. mindshark.ca harvested my email in a way I had never encountered before.  They came through this site’s contact form, and the moment I replied to them, they considered me opted in. After they started spamming me, I contacted them and told them to remove me from their list or face a complaint to netfirms (which they are no longer with), and a post on this blog. I made it clear I had not opted in. I got a happy email from Zamir of Mindshark.ca where I was told I was removed………… And that I had opted in.

Ok so either I am lying or mindshark.ca is lying…..

Here is the email mindshark.ca sent me.

Message:
I’ve helped hundreds of companies increase their traffic and I’d love
to show you what my service can do for you. I don’t promise the world,
I’m straight forward and to the point … I deliver rankings. My rates
are completely affordable and I don’t want to oversell you either, I
start small and have my clients begging for more. I won’t take on your
site unless I know I can deliver rankings. Reply to this e-mail if you
have the slightest interest … you’ll never see rankings the same way
again.

How do I know it was Mindshark.ca?

Because they were the only people I asked who they were. At this point I was a bit naïve and probable should not have replied to the email: But this had been my third month, and I had not had a lot of emails coming in at the time. I made sure to respond to everyone.  A few weeks after I replied I got this email from Mindshark.ca:

Where Mindshark.ca said my comment was: “your website is?” Which was In July 2010 not August.  Out of 20 people that contacted me on my forum between July and August that was the only one I asked who their website was. Which can see there were other people that were contacted through a gmail account or non-mindshark.ca account.

But this is another key in the puzzle because Zamir admitted in his email to me that Mindshark.ca was going through a third party to get emails. But I  think this was the point they were starting up. After all mindshark.ca started their social media in September 2010. I had a few pieces of their spam come in before I finale had enough in April of last year and made the demands of removing my email.

My own traffic score beats Mindshark.ca and all of what I do is organic. Not to mention I have friends with a proven track record when it comes to SEO, yeah they are not cheap though generally my weak skills seems to egg them on to help for free just because sometimes I frustrate them. But still even if the price is high and I get what I was expecting, why try some one that harvested my email? Besides I get a friend discount, and I would be sad if they picked someone else to do their graphic work.  So why try an unknown like mindshark.ca?

Then there is the spam I was sent by mindshark.ca, something about my competition out doing me or something.  I have competition? Never mind this is not a highly profitable niche (I.e. exposing fake hosting review sites). Last month I made $123, which by no means covers the operational costs for this site. Seriously hosting-reviews-exposed.com is a money pit, and this site is nearing in its 5th year. I have even had people offering to buy it off me (Well this is a keyword rich site). Obviously there is something more than money that motivates me to keep this site going.  The only posts that make money are the ones for items like the Kindle Fire, Kindle Touch, and the iPad 3. Next week will be the last of my off topic product reviews, as I should have my personal site up so that will kill the profitability of this site.

Part of my proof that mindshark.ca is not a professional company is how they find customers. Mindshark.ca got my email by going through my contact form waiting for an email from me to hit their in box. With other people Mindshark.ca was harvesting contact details through social media. Not just email accounts, but cell phone numbers and other details. I get contacting a company and soliciting your business. I have done that myself. But what I don’t do is throw the contact information into a mailing list, especially when the other side tells me they are not interested.

What started this latest string of posts on mindshark.ca was someone had their email accessible to everyone for the purpose of bringing in new clients with places like LinkedIn. Like anyone that has a website like *domain removed upon owners request*, the idea of getting more traffic was appealing. He started get emails glorifying the company and than ones with warning of the dangers of the other companies: 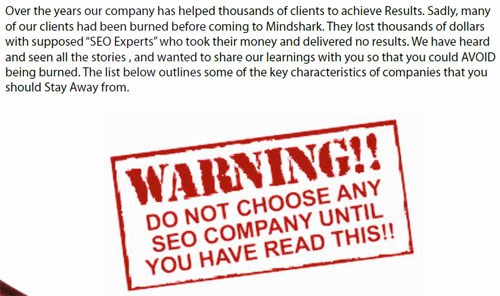 But my friend here decided to not stay on the designated route and went off trail. He decided to see what search engines had to say. How do I know mindshark.ca does not want possible customers to go elsewhere. Because one of the emails from my new friend that inspired me to do these posts. Like this one I posted from Zamir.  That last email from Zamir of Mindshark.ca to my friend who decided to see if Mindshark.ca could to repair the situation. I dare say it was desperate.

Google penguin reshuffled rankings recently , however you will see that site moved off fairly soon.

They are also being legally served as we speak.

We recently were rated #1 SEO Company

None of the negative comments are from any real clients.   As you can see our BBB rating is A.     The internet allows anyone to post anything unfortunately.   We get things moved off very fast, but when google makes a change things can pop back up temporarily.

Feel free to check our case studies and testimonials to see how effective we are.  We also have over 300 SEO firms who outsource all their work to us.

My thoughts on this last emai from Zamir of Mindshark.ca:

I am planning on this being the last post unless Zamir from Mindshark.ca wants to push the subject.

Amazon Cloud Drive – The Good and the room for improvement

Mindshark.ca – in re-review Part 2: Proof is in the details

Mindshark.ca – in re-review Part 1: Did 450 SEO experts hide my thoughts?