If you have know anything about the latest hosting news you will see that Godaddy.com’s Bob Parson is the lead story because he decided to kill a elephant while on vacation last month.  Lets make not bones about it, I am an animal lover.  I have 3 cats (2 no kill shelter adopties and 1 stray), 3 box turtles (1 of which I traded a play station 2 back when they were new for), 3 red ear sliders (aquatic turtle), 2 tiger salamanders,  and 4 tropical fish tanks.  Did I mention I was practically raised by a Saint Bernard and a Golden Retriever?

Not related to Godaddy and somewhat off topic – A cat in need of a home!!!

Now if you will pardon me as I use this post to do something off topic before I go into my thoughts on Bob Parson of Godaddy.com.  Friday night when I came home after grabbing take out I spotted a cat crying on top of my roof, who looked just like one of my own cats.   While it was not one of my cats, it nervously came to me after I climbed up on a ladder.  Which is a good thing since I have terracotta roof  I was not exactly sure I wanted to climb up as I was not sure if I would cause the tile to crash down.  After eating a whole can of food the cat is no longer nervous and has become very affectionate.  Unfortunately due several reasons I can not at this time take on another cat.  So I have surrendered the cat to the Arizona Humane Society.  Luckily last year I had the time to get a new car, a Nissan Versa 2011.  So the cat did not have to go on a 45 minute ride in a car that was on its last leg.  Admitly she probable would be a good car trip cat unlike my own cats that rarely ever leave the house.

So if you are reading this and have the time, money, and room and live near the Phoenix, Arizona area then cat a344689 is for you.

The Arizona Humane Society says she has been spaded and is around 9 months old, though I think she is younger.  Her left ear has been clipped The AZ Humane Society tells me because she  may have been captured to be spaded and released back into neighborhoods, which honestly I am not sure why they did not send this good natured cat to adoption services.  Also she likes organic free range chicken and Castor and Pollux dry cat food. 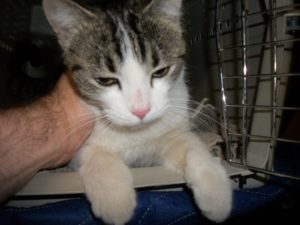 She can be found at:

Even if this cat is adopted there are still many animals in need of homes, which include dogs among other species.   If of coarse you don’t have the time or space, you can always donate like I do to:

You can of coarse volunteer time to help as well.

Anyway just to be clear, I am no fan of PETA mostly because over the years their attempts to bring change have at best been counter to anything practiced by those who seek change such as Martin Luther King jr or Mahatma Gandhi.  Yet another problem I have is apparently they are killing off animals that are surrendered to them, if this is not true I would love to be pointed to the truth.  Either way there are far better charities then Peta like the Humane Society, local no kill shelters, and other established organizations in your community.

Is godaddy.com’s Bob Parson helping or just showing off?

On nranews.com (where I can’t seem to get a direct link to this video), Bob thinks that average American’s will not have a problem with this.  But lets face it not everyone is pro-gun, pro-hunting, and not everyone that hosts with godaddy.com is an American.  Frankly I am starting to think the best response is no response.

The general excuse he gives is that it was to take out an elephant that was damaging the locals crop and he got approval from the local government (not like they could be bought or corrupt?).

But seriously – if the solution to this problem was to shot these animals would it not be a bright idea to arm the locals so they can hunt more animals?  Isn’t that like a National Rifle Association (NRA) dream come true?  Clearly the problem is not just one elephant.   I am not saying I think Godaddy.com should be killing the animals to solve the problem.  I am simply saying the logic is to shot the animals, therefore 1 killing is not going to keep a village fed nor will it solve the problem.  Especially if its done once a year.  The fence and deterrent ideas seem far more feasible and long lasting then having someone come over to kill a single elephant.

What I don’t see is how much Bob of Godaddy paid for this trip.